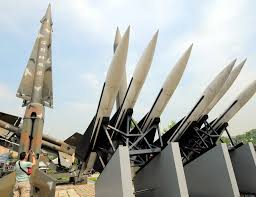 China and Iran, two countries that top President Trump’s enemies list, are pushing back against his tough talk this week with showy and provocative military drills.

The arms would boost the military’s capabilities in individual combat and in air defense, he said, according to the Tasnim News Agency.

Iran on Saturday warned Washington against any hostile actions.

Iran also warned that if attacked, its missiles would target the U.S. 5th Fleet based in Bahrain, American installations in the Indian Ocean and the Israeli city of Tel Aviv.

“These points are all within the range of Iran’s missile systems, and they will be razed to the ground if the enemy makes a mistake,” Mojtaba Zonour, a member of the Iranian parliament’s National Security and Foreign Policy Commission. “And only seven minutes is needed for the Iranian missile to hit Tel Aviv.”

Iran said the missile was not capable of carrying a nuclear weapon and that testing defensive weapons is its right.

The sanctions were triggered by an Iranian ballistic missile test on Jan. 29 that the U.S. said violated a United Nations Security Council resolution that prohibits launching missiles capable of carrying a nuclear weapon.

CAN, TPPT Urge Nigerians To Pray For President Buhari