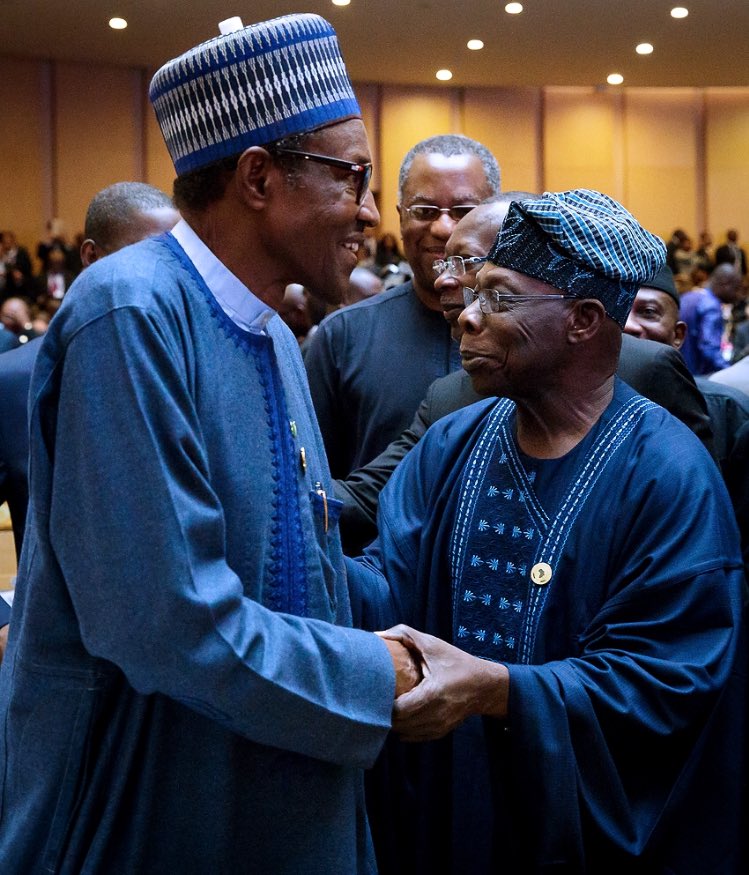 In reaction to the letter written to President Muhammadu Buhari by former president Olusegun Obasanjo, the former President of the Federal Republic of Nigeria, Senator Amah Ebute write thus;

Re: THE WAY OUT: A CLARION CALL FOR COALITION FOR NIGERIA MOVEMENT

I am bemused to again read a public letter/special press statement from you addressed to President Muhammadu Buhari GCFR, titled  “The Way Out: A Clarion Call For Coalition For Nigeria Movement.” I recall that in 2013, you wrote a similar letter to former President Goodluck Jonathan,  GCFR, which you captioned, “Before It Is Too Late.”

In my considered and carefully drafted response to that letter to former President Jonathan, I faulted the contents of your epistle variously and returned the verdict of guilt and condemnation you irreverently, dishonestly and selfishly handed down on the administration of Dr Goodluck Jonathan back to your doorstep. As an erstwhile President of Nigeria, I was riled and never concealed my anger against your grandstanding, passion and obsession with open letters to serving leaders, instead of a silent advice on presumed wrong steps as required of your status.

In that letter, you explained that stepping out publicly was because President Jonathan had ignored previous letters you discreetly mailed to him, which caused the public outburst. In spite of the unconvincing excuse, I proceeded to advice that a former President genuinely interested in the peace, unity and progress of his country does not toe such path, which diminishes his self-esteem, dignity and character. I erroneously thought you would harken to my counsel.

But today, I am proved wrong, as you have again trampled on decency and decorous behavior by publicly attempting to ridicule, malign and assault the seat of power with a repeat letter to President Buhari. In truthfulness, would you again claim President Buhari ignored your secret/private letters to him which has necessitated the public interrogation of issues of governance and leadership under the Buhari Presidency? The answer is certainly no! And this posturing has finally erased the tiniest modicum of respect and trust in you from Nigerians.

In the current instance too, you have reeled out a torrent of subsisting problems and perceived deficiencies of the Buhari Presidency very hypocritically and in utmost contempt for the office and personality of President Buhari. It is all in veiled pursuit of your secret agenda for the absolute ruination and destruction of Nigeria, a foundation faultily laid by you between 1999 and 2007, when you served as President of the country.

Each time you embark on your voyage of self-destruction, you endlessly adumbrate on pervading unresolved national problems, you created and nurtured to fester.  The issues of poverty, insecurity, poor economic management as trumpeted in your letter have existed with Nigeria and aggravated under your reign as President. Precisely, poverty, hunger and disease are cardinal components of the Millennium Development Goals,  (MDGs), which you claim to be spearheading efforts in the guise of “Zero Hunger” initiative; but gave no attention to it when you wielded power at Aso Rock. This is the pretense and deception that have become your trademark and uprooted or alienated you from Nigerians.

And in your repulsive character of appropriating what belongs to others to yourself, you are preaching about targets, the Zero Hunger goal would reach by 2025  in Nigeria with the participating states. Therefore, a mindset like this prefers not to see or much more acknowledge the laudable initiatives of the Buhari Presidency in achieving food security and self-sufficiency such as the Anchor Growers Programme for rice production and the various agricultural loans to Nigerian farmers and the revitalization of hitherto moribund fertilizer plants across the country. These steps have placed Nigeria on the map of countries in the world earning foreign exchange from exportation of agric produce.

No one is surprised that you disparaged President Buhari’s efforts in curbing the monster of corruption and insurgency, which flourished under your administration and became untameable, with the reserved commendation by declaring that “it is not yet uhuru!” You display the lack of capacity to wholeheartedly appreciate the efforts of other leaders. Rather you preferred to flaunt the African spread of your Presidential Library, which Nigerians have severally and collectively accused you of corruptly funding it.

It is quite funny the failure to acknowledge that the EFCC under Buhari has unprecedentedly recovered looted public funds in assets and cash, trillions of naira  never before known to the history of Nigeria’s anti-graft war. Today, you frequently accuse your former Vice President, Alhaji Atiku Abubakar as very corrupt, but could recover and publish any kobo you recovered from him back to national treasury. The foundation for the dubious sale of national public assets like NITEL, PHCN etc was laid by you.

The seeds of Boko Haram insurgency was sown under your administration in Borno and exploded, soon after you were forced to relinquish power after the failure of the infamous third term bid.  The subsequent leaders you imposed on Nigeria could not handle the problem, until President Buhari came on board. As clever and astute as you claim in leadership, you had no solution to the puzzle of militancy in the Niger Delta or the communal clashes that plagued most communities in Nigeria.

President Buhari is leading Nigeria at its most tumultuous and tormenting era, with virtually all regions of the country embroiled in violent crises simultaneously. But he has significantly reduced the tempo of these conflicts and enthroned peace in most conflict areas. The herders/farmers conflict is unfortunate, but the President has not relented either. Apart from drafting security to the affected areas, Buhari has inaugurated an Economic Team headed by the Vice President, Professor Yemi Osinbajo to work out a permanent solution to the conflict based on its economic undertone.

The claim to team work and collaborative efforts is spurious and porous. There is no such leadership content in you, exhibited throughout your years of leadership of Nigeria. Indeed, your close political associates often accuse you of resenting advice and it has earned you the epaulet of Mr.Know All. It is unconscionable to attempt to reinvent your character and perception of leadership different from what is associated with you simply because you want to impress yourself with tirades against Mr. President.

Furthermore, it belies the truth the postulation that the decision to denounce your party, the PDP to join the change train in 2015 was for altruistic reasons. The disagreement with former President Jonathan stemmed from his failure to seek your counsel and protect your strategic interests resulted in this decision and the shameful and un-statesmanly manner you reacted. This is a fact in public domain and it is faulty to claim otherwise. At every point, you are economical with the truth, by serving Nigerians with a menu of lies.

Therefore, when you publicly declared that you have withdrawn yourself from partisan politics, it bemused many Nigerians. What else could be the colour and face of politics, when in your letter to Buhari, it expressed concern about  the endorsement of President Buhari by some State Governors for a second term? What else is political, when you offer the unsolicited advice to President Buhari not to contest the presidency again in 2019? How else is politics played, when you incite public anger against a sitting President, by conjuring all manner of half-truths or outright falsehood against his administration?

No former President of Nigeria who knows the poor state of the economy President Buhari inherited in May 2015 would not appreciate the efforts and measures adopted in revamping the economy. Nigeria was in recession, had an empty treasury, while   public debts piled to frightening levels, most especially in salaries of public workers and local contractual debts, fraudulent oil subsidy claims and so forth. Meanwhile, crude oil price, the major national revenue source had dropped to as low as $28 per barrel.

In spite of the precarious situation and paucity of national resources, President Buhari navigated his way through the tough terrain, offsetting public debts, diversifying the economy, funding public expenditure and executing capital projects across the country in amounts never before expended on funding capital projects. He has been able to raise the emptied Nigeria’s foreign reserves to over $40 billion in two years and the Nigerian Stock Market value has risen to an all- time high of over N15 trillion. When ordinary, Nigerians expect an immediate impact of an economy which has just freed itself from recession, it’s understandable. But when someone like Obasanjo makes the same assumption and claim mismanagement of the economy, it is outright blackmail, and mischievous.

Rightly, like you asked yourself the question,  “what does Obasanjo want again?” But the answer you offered is also steeped in lies because Nigerians are not convinced that you are genuinely after “the best for Nigeria and Nigerians.” There is a masked political interest in your outing and as reflected in this open letter, which you revealed yourself as movement for the “Coalition for Nigeria”, (CN) for a strange redemption mission only defined in your senses. It is this smart way of launching an alternative platform that you have condemned unreservedly the ruling APC and the opposition PDP. Thereafter, you proceeded to paint a picture of gloom and dark clouds in Nigeria reminiscent of the 1999 experience, which you could not make better, but shamelessly sermonized its baseless rebirth in the current dispensation.

Chief Obasanjo, you must realize that there is absence of any solid legacy from you to remind any Nigerian of your status as a leader who once ruled Nigeria. So, enough of this bashing of every Nigerian leader. During your time, you performed abysmally, but Nigerians did not ask you to either resign nor not to re-contest. Contrary to your misguided belief, Nigerians are impressed with the ruling APC and the Buhari Presidency for what it has recorded so far.

Nigerians know President Buhari is capable of offering more, if he continuous in office to 2023 with the support of Nigerians.   Former President Obasanjo, you can keep your advice, but President Buhari is sure to coast to victory in 2019 to engender more development for Nigerians. Nigerians should all be alert to avert your distractions or the “Obasanjo syndrome” as you have   unleashed in the polity to disrupt harmony and peaceful co-existence in the country.

I thank you for your audience and may God bless Nigeria.

Former President of the Senate