The immediate-past president of Medical and Dental Consultants Association of Nigeria, Dr Steven Oluwole [image above] on Sunday has suggested that the United Nations should exclude the United States from the investigating panel that would look into the assault on a hospital facility in Kunduz, Afghanistan.

The hospital is owned by an international organisation, Médecins Sans Frontières (popularly called Doctors without Borders).

It was reported that the medical facility was attacked by the US military, where Doctors, Nurses, patients and other staff were reportedly either killed or maimed.

The International President of MSF, Dr. Joanne Liu, had in reaction to the attack said, “No warnings were issued to non-combatants to evacuate the facility, if it is assumed or alleged there were combatants hiding in the facility. 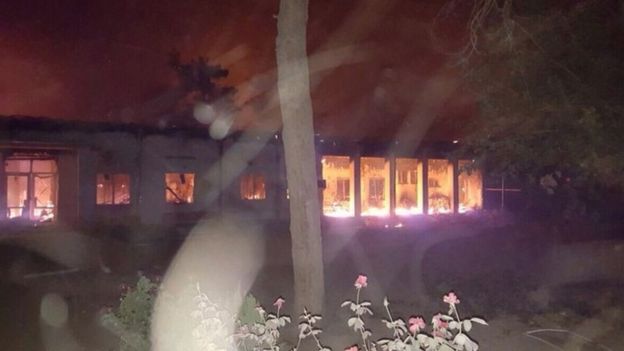 “It is, therefore, cowardly for any modern military to repeatedly hit health facility under such pretext. Our patients burned in their beds, MSF doctors, nurses, and other staff were killed as they worked. Our colleagues had to operate on each other.”

Oluwole in a statement obtained condemned the attack, stressing that allowing the US military or President Barrack Obama to be part of the investigators would amount to “injustice”

Afghan staff are in shock inside the Doctors Without Borders hospital in Kunduz, Afghanistan, after the air attack

He said, “What is the collateral of the military of the USA that will shock and still the world? The United Nations will fail the people of Afghanistan, the volunteers of MSF, and indeed every human of free conscience, if the U.S. military and its Commander-in-Chief are allowed to investigate and sit in judgment over their assault on a medical facility! Nothing less than criminal investigation will be appropriate as it is the character of the offending military.

“The seemingly cold, calculated, and repeated aerial assault on Médecins Sans Frontières (MSF) hospital facility in Kunduz, Afghanistan, which lasted for about an hour on October 3, 2015, is difficult to describe as a mistake by a military that boasts of the latest navigational technology.”

Protestors hold up their hands painted red as Commander of U.S. forces in Afghanistan John Campbell testifies during a Senate Armed Services Committee

He said the deafening silence of global and national health organisations and societies to a tragedy of this magnitude illustrates the racist and class ideology that defines the world politics at present.

The MDCAN ex-President said “Had this being the health facility of any of the world great powers, their military would not have waited for any investigation before declaration of war crimes and crimes against humanity. Not only the military commanders would have been guilty, the Commander-in-Chief would have been destined for The Hague. But, it is the health facility of MSF; so allegations of war crime and crime against humanity is absurd until the offending military investigates its own crimes and sit in judgment of its own case!

“What turned its military from a force of liberation to a force of oppression and spread of terror? It is, therefore, an unfortunate irony that a nation that was founded on the principles of freedom, liberty, and respect for human rights could engage in the reckless act of killing patients, nurses, and doctors.”