“We challenge him to come out in clean hands in those two portfolios he headed. Or, we will help him to expose his records of performance during those periods.” – IBB. Consequently, Buhari quickly made a detour and issued statement claiming the investigation of Buhari would only be limited to Jonathan.

Nigeria President Muhammadu Buhari surely meant well for the Nigerian people. His integrity, discipline and avowed commitment to fight, name and shame corruption had never been in doubt since Nigerians have high hopes in his administration to ‘fight corruption among the elites’, in a bid to free Nigeria’s economy from Kleptomaniac.

As it is a fad that “when you fight corruption, surely corruption will fight back,” aptly captures the trending conspiracy of few Nigerian Army Generals (retired) and former Heads of State who allegedly prompted Buhari to ‘let-off’ his earlier, intentional investigation of $182million Halliburton bribe scandal, so he may continually ‘govern Nigeria in peace’.

CNN iReport gathered that few weeks before Buhari made his maiden visit to United States, words reached him that few retired Army Generals who were erstwhile Heads of State were allegedly not happy with the planned moves by the no-nonsense disciplinarian to re-open the Halliburton scandal, with the sole intention to expose, disgrace and prosecute some of culpable generals and other highly-placed Nigerians whose hands may have been ‘soiled’ by the cookie-jar of corruption in Bonny Island Liquefied Natural Gas Project.

As such, after General Ibrahim Badamasi Babangida (IBB), a former Nigeria’s Head of State received a phone call from General Olusegun Obasanjo, also a former Nigeria’s president where he brought the attention of IBB to the fact that the way Buhari was going about corruption-fight, he would eventually probe the majority of past administration, including IBB era.

This position was echoed by another Nigerian Head of State, General Abdulsalami Abubakar; which prompted a conspiracy theory to ‘place Buhari in order’. Abdulsalami had visited IBB in his Minna Castle in Niger State, there it was concluded that IBB should stylishly pass on their position to Buhari to halt his earlier intended probe of his predecessors. 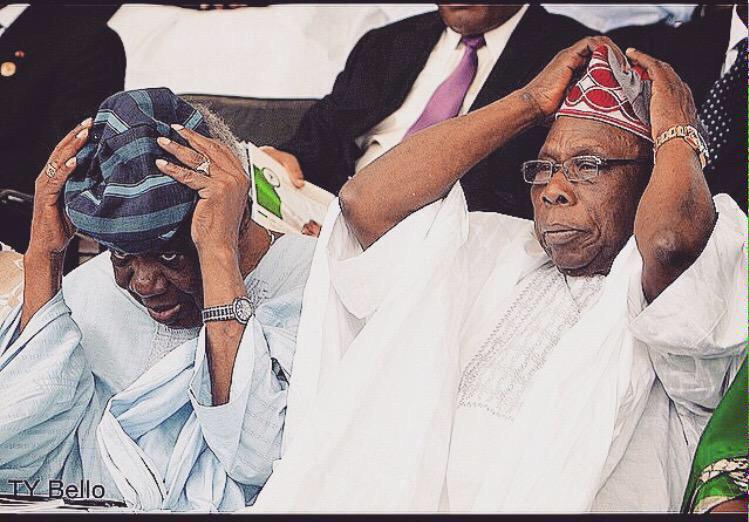 In a press statement issued by IBB through his media adviser, Prince Kassim Afegbua, it reportedly reads: “On General Buhari, it is not in IBB’s tradition to take up issues with his colleague former president. But, for the purpose of the record, we are conversant with General Buhari’s so-called holier-than-thou-attitude.

“He is a one-time minister of petroleum and we have good records of his tenure. Secondly, he also presided over Petroleum Trust Fund (PTF) which records we also have. We challenge him to come out in clean hands in those two portfolios he headed. Or, we will help him to expose his records of performance during those periods. Those who live in glass houses do not throw stones. General Buhari should be properly guided.”

CNN iReport gathered intelligence report reached Buhari on the position of these retired Army Generals and former Heads of State, and bearing in mind how mean they can fully engage him in ‘dirty-fight’ which may ridicule him in the eyes of Nigerians and expose his stewardship then as Minister of Petroleum in 1976 that led to the mysterious disappearance of a whooping US $2.8 Billion from Nigerian National Petroleum Corporation, NNPC account in Midlands Bank, United Kingdom allegedly under his watchful eyes.

Consequently, Buhari quickly made a detour and issued a press statement through Femi Adesina, his Special Adviser, Media & Publicity claiming the investigation of Buhari administration would only be limited to his predecessor, Goodluck Ebele Jonathan, GEJ, the man who honorably handed peacefully to Buhari on May 28, 2015 at Eagle Square so Nigeria may remain united as an indivisible nation.

For the records, Buhari was appointed Minister of Petroleum in 1976 under the Murtala/Obasanjo administration. Not much is known about any scandals that occurred during his tenure as Minister, but there are rumors of the mysterious disappearance of US$2.8 Billion from the NNPC account in Midlands Bank in the United Kingdom, during Buhari’s stewardship.

Now that IBB has threatened to expose him, it lends a certain credibility to the rumors indicting Buhari of grand graft.

As if Jonathan knew that this would happen. In the last days of his administration as president in Aso Rock villa on May 27, 2015 during Federal Executive Council valedictory session witnessed by big-wigs of Peoples Democratic Party, he said “Some people are even calling for the probe of the government, but I think in Nigeria, there are a lot of many things that will be probed, very many things, even debts owed by states and debts owed by this country from 1960 up to this time. They say it is Jonathan’s administration that accrued these debts,” Jonathan said.

CNN iReport investigation showed that Jonathan administration may have been singled-out as ‘corrupt government’ due to the fact that he was a minority-leader from Niger-Delta and obviously not a military, but a civilian leader. There are feelers from some Nigerians that this probe may not have happened if Jonathan had been a retired Army General.

For Folu Adewope, an undergraduate of University of Texas Arlington, UTA, her words: “This is obviously a witch-hunt, charade and selective humiliation with ethnic coloration under corruption-guise. I strongly believe this investigation would not have happened if Jonathan had hailed from the North and had been a retired Army General.

“Why can’t Buhari open the Halliburton scandal, and openly prosecute Obasanjo, Abdusalami, Atiku Abubakar, a former Nigeria’s Vice president and every other corrupt Nigerians named in the scandal. As Nigerians, we are interested in this case.”

Recently on his Facebook wall-page, Femi Adeshina, special aide to the president on media and publicity, said: “It would be a distraction for the President to begin digging into all former administrations, but for a proper take off of the President Muhammadu Buhari’s government, there is need to look into the immediate past government (Jonathan’s). We are interested in investigating Jonathan’s government to recover stolen funds”.

As at the time of going to the press, members of International Community, particularly the United States government is shocked that Buhari ought not to leave any stone unturned in fighting corruption no matter whose ox is gored. The Halliburton bribery scandal is seen by members of international community as a litmus test for Buhari to prove his desire effectively to combat corruption among the elites in Nigeria.