Ohanaeze Ndigbo is an apex Igbo socio-cultural group in Nigeria.

The group represents all Igbo communities within and outside Nigeria.

Igbos by census, represent one of the three largest ethnic groups in Nigeria, according to Wikipedia.

A group of Igbo citizens had approached the Corporate Affairs Commission (CAC) and registered the “Ohanaeze Ndigbo General Assembly“.

However, CAC made a sharp u-turn and withdrew the certificate of incorporation without warning.

In a public notice signed by the management, CAC directed the trustees of the association to return the said certificate to the Commission.

It said the conditions for the issuance of the certificate have not been fully fulfilled, hence the withdrawal.

CAC wrote: “This is to inform the general public that the Certificate of Registration No. IT 144918 issued inadvertently to the Trustees of OHANAEZE NDIGBO GENERAL ASSEMBLY has been withdrawn by the Corporate Affairs Commission.

“The Trustees of the Association have been advised to return the said certificate to the Commission as same has been canceled.

“The conditions for the issuance of the certificate have not been fully fulfilled.”

In a short piece made available to ElombahNews, he wrote:

“The registration of another Ohaneze “Ndigbo General Assembly” was done in bad faith and, I condemn it in totality!

“Those behind it must be ashamed!  O bu etua ka Nama ga esi gaa Umuahia?

“Now CAC has withdrawn this certificate, then I ask, was due diligence not done ab initio?”

See a copy of the certificate of incorporation below: 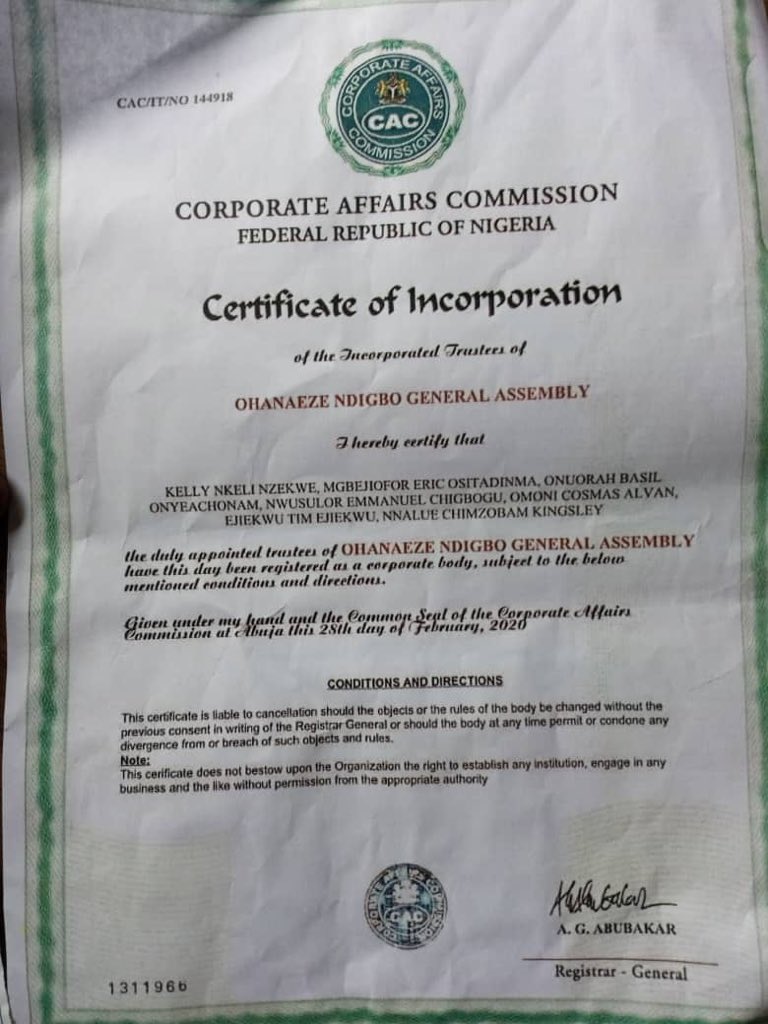 Besides social criticism, Ezeoke is also a campaigner for the oppressed and voiceless members of the society.

A philanthropist, he is recognised as a fair and equitable entrepreneur.