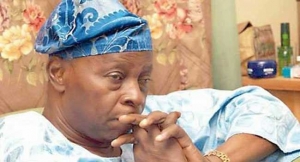 Former Secretary to the Government of the Federation and presidential candidate, Olu Falae, on Tuesday said his abductors used machetes to beat him and made to trek bare footed day and night without food.

Speaking to Channels Television in his residence in Akure, Ondo State capital, Mr Falae said that he had been having a running battle with the Fulani cattle rearers whose cattle used to consume his crops.

Mr Falae said that the six young men were armed with guns and cutlasses and they continuously threatened him with death if the 90 million Naira they ransom demanded was not paid.

The Elder Statesman, however, called on the Federal Government to regulate cattle rearing so that they would not constitute problems for other Nigerians.

Mr Falae, who confirmed that his family paid a ransom to secure his release, maintained that he didn’t bother to find out how much was paid. He thanked the Federal Government, the police, the Ondo State Government, his relatives and all Nigerians that showed concern during his ordeal.

President Muhammadu Buhari had directed the Inspector-General of Police and other security agencies to take all necessary action to ensure the safe and speedy rescue of the former presidential candidate.

Mr  Falae was kidnapped from his farm in Ondo State on Monday, September 21 with his abductors, suspected to be Fulani herdsmen, demanding for a cash sum of 90 Million Naira as ransom for the septuagenarian to be released.

The former minister said this in a Facebook post titled, ‘Herdsmen from hell’ while reacting to the abduction of a former Secretary to the Government of the Federation, Chief Olu Falae, by suspected Fulani herdsmen.

Fani-Kayode elated for being voted most consistent opposition voice…

Fani-Kayode said Buhari had in the past referred to Fulani herdsmen as ‘my people’. He, therefore, argued that he was not surprised that Fulani herdsmen were hardly arrested despite their many acts of violence.

He said, “In the last few years the Fulani herdsmen have attacked, ravaged and pillaged many rural communities south of the River Niger and they have slaughtered and raped thousands of innocent people in the South-South, the South-East and the South-West.

“We recall how, after a violent clash between them and some Yoruba farmers in Oyo State in 2000, General Buhari (as he then was) led a strong delegation of northern leaders to see the late Governor of Oyo State, Lam Adeshina. On arrival, Buhari put the question to him: ‘Why are your people killing my people?’ This was a classic case of a Freudian slip.

“The Bible says out of the abundance of the heart the mouth speaks. The general had spoken his mind. Governor Adeshina was shocked with disbelief and he responded by telling Buhari that he was rather surprised that a former Head of State would refer to one ethnic group as his people while referring to another as someone else’s.”

Fani-Kayode, who was the spokesperson for former President Goodluck Jonathan’s campaign organisation, said Buhari had never shown concern for the plight of the people of the South.

He said this was why it took Buhari 48 hours to react to Falae’s kidnap.

Fani-Kayode said it was possible that Buhari knew those behind the abduction Falae because the herdsmen released Falae 24 hours after the presidency condemned the abduction. He noted that no one had since been arrested for Falae’s kidnap.

He added, “Another curious twist to the tale is the fact that it took the Buhari administration two days to make any formal announcement on Falae’s abduction and just the day after they (Presidency) finally did so, the elder statesman was suddenly released.

“The question is this: who is pulling the strings from behind the scenes and who is attempting to test our resolve and test the waters?”

The Peoples Democratic Party chieftain said Falae’s claim that the Fulani herdsmen had links with Boko Haram should not be ignored.

He said the Fulani herdsmen were a security threat and could easily cause crisis in the South-West having populated the entire region under the guise of selling cattle.