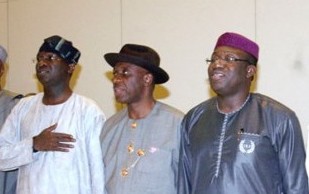 The Senate President Saraki disclosed that he will not make public the ministerial list until at plenary on Tuesday next week.

Elombah.com had reported that long after the Senate adjourned plenary to Tuesday, October 6, after waiting in vain for the list of ministerial nominees from the presidency, the list finally arrived late Wednesday. Dr. Bukola Saraki disclosed on his Twitter handle that the list was received at 5pm on Wednesday (today).

Also nominated to be minister according to TheCable is Lai Mohammed, national publicity secretary of the ruling party, and Kayode Fayemi, who lost his Ekiti governorship re-election bid in 2014 to Ayodele Fayose of the Peoples Democratic Party (PDP).

From the south-east are the likes of Chris Ngige, former governor of Anambra state and former senator of the federal republic; and Ogbonnaya Onu, first executive governor of Abia state and former national chairman of the All Nigeria Peoples Party (ANPP), on whose ticket Buhari contested and lost the 2003 and 2007 presidential elections. Udoma Udo Udoma, a former senator who represented Akwa Ibom south senatorial constituency at the national assembly, made it as well.

The online newspaper said Buhari also nominated for ministerial appointment, Aisha Alhassan, who was on the brink of becoming the first elected female governor before eventually losing the Taraba state governorship election to Darius Ishiaku of the Peoples Democratic Party (PDP).

From his days at the Congress for Progressive Change (CPC), Buhari picked Malami Abubakar, a senior advocate of Nigeria and former legal adviser of the defunct party; Hadi Sirika, a former pilot and former CPC senator who represented Katsina north senatorial district; as well as Adebayo Shittu, former governorship candidate of the party in Oyo state.

Ibe kachikwu, group managing director of the Nigerian National Petroleum (NNPC), is a surprise appearance on the list. But with Buhari already declaring himself minister of petroleum resources, it is likely that Kachikwu will combine his current portfolio with that of the minister of state for petroleum resources.

Meanwhile the much-awaited appointment of ministers which President Muhammadu Buhari promised would be done by September will no longer be feasible as the senate could not conduct the screening of the ministerial list following its late arrival, Elombah.com reports.

Senate President Bukola Saraki this evening admitted that he had received the list of ministerial nominees from the Presidency at 5.00 pm, long after senate adjourned sitting for the day.

The list was presented to him by Senior Special Assistant to the President on National Assembly Matters, Senator Ita Enang, and Abba Kyari, Chief of Staff to President Muhammadu Buhari.

Saraki to unveil Ministerial list Tuesday next week, because Buhari delivered it late