Father Mbaka protests killing of his fellow priest in Enugu

Reverend Father Ejuke Mbaka was among the Catholic priests that protested the killing of their fellow priests in Enugu.

The hoodlums believed to be Fulani herdsmen struck yesterday evening along Ihe-Agbudu Road in Awgu.

The Police Command in the state and the Director of Communication, Catholic Diocese of Enugu, Rev. Fr. Benjamin Achi confirmed the killing of the priest.

“As we speak, Catholic priests in Enugu are on the streets demonstrating over these incidences,” Achi said.

Father Offu, who hailed from Okpatu in Udi, was until his death the parish priest of St. James the Greater Parish, Ugbawka.

This medium later reported that following the killing of Rev. Father Offu on Thursday, Catholic priests took to the streets in protest to express their anger.

The Enugu Catholic director of communication said that the situation had become unbearable as another Catholic priest, Rev. Fr. Ikechukwu Ilo recently escaped assassination on June 19, 2019.

He said that Ilo was still recuperating from the gunshots he received along Numeh- Nenwe road in Nkanu East Local Government Area of the state.

Among those at the protest was Reverend Father Mbaka.

Mbaka was spotted with banners one of which reads “When will this madness of Fulani herdsmen stop?” [See photo below]

Reverend Father was a staunch supporter of the President Muhammadu Buhari administration. 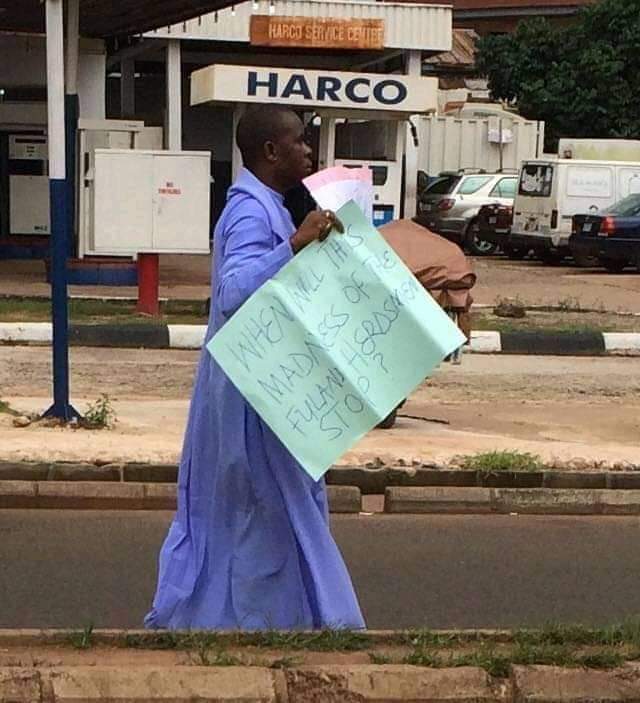