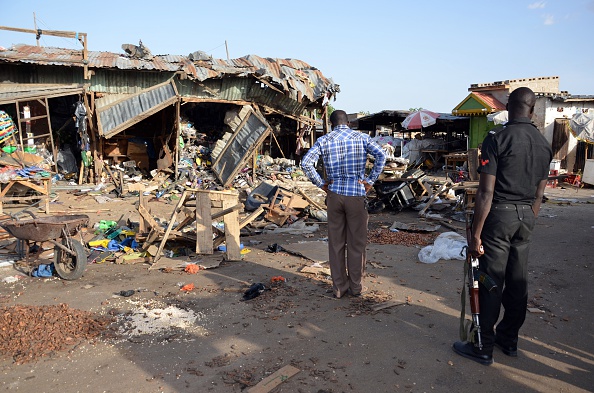 It was a case of escaping the lion and being bitten by a serpent on Sunday when residents fleeing a suspected Boko Haram attack on an Adamawa village were killed by female suicide bombers.

According to Vanguard, the suicide bombers killed at least 11 people in northeast Nigeria after hiding among the residents fleeing Boko Haram attacks on their village but were killed when the assailants detonated bombs in their midst.

The attack happened in Dar village, in the north of Adamawa state, on Saturday evening, the former head of the Madagali local government council, Maina Ularamu, said.

Earlier, some armed persons suspected to be members of the Boko Haram sect on Saturday night attacked a village in Adamawa State and killed 12 people.

Former Chairman of Madagali Local Government Area, Maina Ularamu, while narrating the attack, said that the insurgents attacked Dar Village in the council at about 8:30 p.m.

Boko Haram has repeatedly attacked the area, which is near the border with Borno state to the north and the Islamists’ Sambisa Forest stronghold, prompting calls for better security.

“Residents fled to the bush. After a while, two women who disguised as fleeing locals blew themselves up… while the gunmen shot at survivors,” he told reporters.

On September 11, seven people were killed when a bomb went off at a camp for people displaced by the conflict outside the state capital, Yola — the first time Boko Haram has attacked refugees.

Thirty-one people were killed when two male suicide bombers detonated their explosives at a market in Yola on June 4.

Increasingly, the group is using two or more bombers, detonating the second or third explosives after people rush to help those caught up in the first blast.

Similar tactics have been seen in Boko Haram attacks in Chad, Cameroon and Niger.

This month alone 101 people have been killed in Nigeria, according to an AFP tally, while nearly 1,370 have died since President Muhammadu Buhari came to power on May 29.

On Sunday, soldiers shot dead a suspected suicide bomber outside the main military base in the Borno state capital, Maiduguri, detonating explosives concealed in her handbag, a civilian vigilante and a military source told AFP.

At least 34 people were killed in a wave of attacks on Thursday night and Friday morning on the outskirts of Maiduguri, while last month 117 died in explosions in the Ajilari Cross area of the Borno state capital.

The military source, who requested anonymity as he is not authorised to talk to the media, said the use of human bombs was a sign of the group’s desperation and frustration at a fight-back by troops.

“They are looking for every opportunity to hit back, which is why they have resorted to soft-target attacks on mosques and markets and such attacks on a military base is intended to show the terrorists are still strong,” the officer added.

Teachable Moment for Buhari: modern economy is not run by ‘body language’