No casualty or injury was‎ recorded but some sections of the filling station were affected by the inferno. 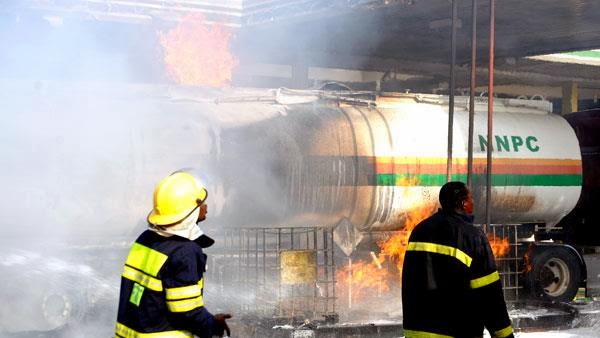 The Nigerian National Petroleum Corporation (NNPC) mega station at the Central Business District in Abuja has been gutted by fire.

A member of staff at the mega station who preferred anonymity told the News agency of Nigeria(NAN) on Monday that the fire started around 10 p.m. ‎when a tanker was discharging fuel to the tanks of the petrol station.

The source said that no casualty or injury was‎ recorded but noted that some sections of the filling station were affected by the inferno.

It added that the fact that it was weekend and late in the evening, reduced the risk of casualties and significant damage.

He said that officers and men of the Federal Fire Service Abuja were on hand to tackle the fire and helped in preventing it from spreading to neighbouring buildings.

Some eye witnesses confirmed that the prompt response of the fire service helped the situation.

Yarima sani, an eye witness, said, “I was driving close with the intention to fill up my tank when we were asked to use a different road that there was fire at the station.

“I parked and trekked and I saw the fire service people were already there helping to quench the fire,” he said.

He added that some security men helped in controlling traffic.

He said that the fire started around 9.28 p.m. while a tanker was discharging product. He said the service received a distress call immediately and quickly deployed its men to the scene.

“Our fire fighters responded immediately to the fire outbreak on Sunday at the mega station.

“The quick intervention limited the loss to the vehicles alone.

“It could have been more devastating if it had happened in the day time, especially afternoon, “he said.

He called on filling stations to be cautious while discharging petroleum products.

He called on filling stations to be cautious while discharging petroleum products.