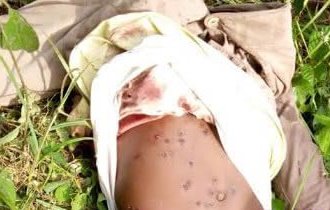 A 40-year-old fish farmer was, on Saturday, found lifeless without its head in Udu, Warri South West local government areas of Delta State.

The victim, a father of two who was reportedly killed by unknown assailants at his fish farm behind the secretariat, was identified as Samson Bebebo.

He was reportedly shot and beheaded when he was returning home after his routine work at his fish farm, it was learnt.

His farm can be found a few distance away from the disputed land between Alaska and Ogbe Ijoh communities.

Elombah.com gathered that the victim, an indigene of Ogbe Ijoh, was shot and, thereafter, beheaded over some land dispute between Aladja and Ogbe-Ijoh communities.

While the assailants are unknown, rumours have it that some Urhobo are responsible.

The Ogbe Ijohs, Elombah.com gathered, have been having a running battle over land with their Urhobo neighbours.

Meanwhile, the Warri Area Commander was said to have visited the area and the headless corpse taken to Warri Central Hospital for preservation.

Spokesperson to the Delta Police Command, DSP Andrew Aniamaka, who confirmed the development to reporters, said investigation was on.

Woman sleeps with 2 husbands on one bed in Zimbabwe