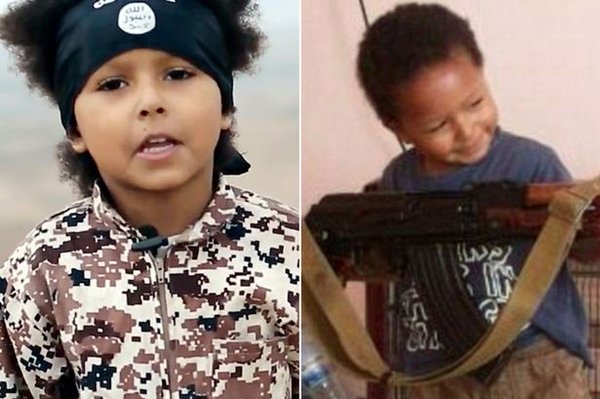 A child who featured in the latest sick Daesh video has been identified as the son of London convert Khadijah Dare, Twitter: muhajirah fi sham.

A London taxi driver has said that he is the grandfather of the young child shown speaking in the latest sick Isis video from Syria, reports AfricanSunTimes.

Nigerian-born Henry Dare is the father of Grace “Khadijah” Dare, a Christian convert from Lewisham, who converted to Islam in around 2012. She took her son Isa on moving to Syria to marry Swedish militant Abu Bakr, who was later killed.

Henry Dare told Channel 4 News he had not seen his grandson Isa for over three years and was surprised and disappointed to see him in the video, which shows the killing of five Syrians by five IS thugs including one with an English accent.

Asked whether his grandson knew what he was doing Henry said: “No, he’s a kid, he’s a minor. He’s under five. He’s acting under the influence of the IS leaders.”

Hinting that he had spoken to his grandson on the phone Dare told The Telegraph he hoped to see his daughter and grandson again.

“I was surprised when I saw the picture. It’s definitely him. Of course I’m worried but there’s nothing I can do now.

“I’m not angry – I would never have expected it. I just hope someone is trying to bring them back.”

Since moving to Syria Khadijah has posted messages and images on social media under the name Mmuhajirah fi Sham, including one of her son holding an AK47.

Khadijah said she would never return to the UK and that the only thing she missed about life here was junk food and Chinese takeaways.

She also hoped to be the first UK woman to behead a prisoner for Isis.

Hundreds of UK citizens are thought to have gone to join Isis in Syria, including a number of women and girls nicknamed “Jihadi Brides.”

The British women are notorious in Raqqa, the stronghold for the group, because of their apparent love of cruelty for anyone who transgresses against their religion.

The pitfalls in a north-east development commission