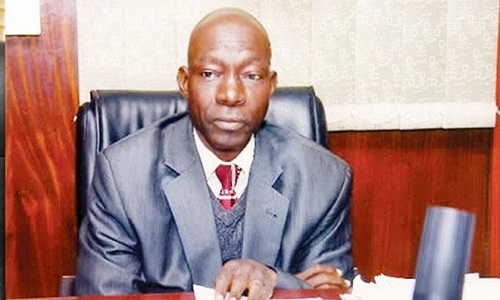 Senate on Tuesday pledged to probe the un-remitted N3.3 trillion alleged in the report submitted by the Auditor-General of Federation, Samuel Ukura [above] to the clerk of National Assembly, Salisu Maikasuwa.

Ukura had on Monday in 2014 audit report presented to the National Assembly on Monday revealed how Nigerian National Petroleum Corporation (NPCC) failed to remit N3.2 trillion into Federation account from sales crude oil as stipulated by 1999 Constitution.

Speaking on the report in an interview with newsmen, Senate Spokesman, Senator Sabi Abdullahi (APC, Niger North), said the queries raised against various government agencies, particularly the Nigerian National Petroleum Corporation ( NNPC), on alleged mismanagement of national revenues, were too grave to be ignored by the Senate.

In his words, “The Auditor-General is raising a query, it is not an indictment.

“So when he raises his queries, the essence of the Public Accounts Committee is to invite those parties involved in the query and through the instruments of their own work, investigate all the issues by seeking for clarification.

“And at the end of the day, where they have infractions or infringement on certain procedures, they met out appropriate sanctions as stipulated by extant rules and regulations”.

He added that the 8th Senate, being one driven by transparency, accountability and probity, will not in any way sweep the report under the carpet as previous Senate and by extension, National Assembly were alleged to have done with similar reports.

“The eight senate has chosen to be different as we have stated severally since we came on board and for which we came up with our legislative agenda to make us different from the past because we are in the season and period of change and we want to seriously key in to that.

“Along that line, you could see the courage that we have to make some differences from what has obtained in the past and on this note, we have passed reports of some committees like the TSA, which is a classic example.

“Through that exercise, we were able to save the country, N7bn.

“There are similar works that have been done. We want to say that since we have chosen to be different.

“We urge Nigerians to wait and see what we will make out of the investigation”, he added.

He however said the past Senate  or National Assembly should not just be accused of not treating such reports in the past, saying the problem might be that they didn’t do enough over such reports and not just treating them at all.

His words: “Without holding forth for the past assemblies, I want to say that it is not as if they have not been doing anything about the past Audit Reports.

“But perhaps they have not taken their action up to the scale that would have made a huge impact that people want to see.

“If that is what the Auditor-General means,  I agree with him”.

Ebelechukwu Obiano takes over from Willie Obiano as gov from March 17, 2016