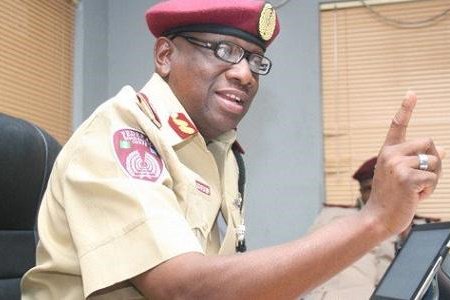 The Federal Road Safety Corps (FRSC) has, on Monday, denied the report making rounds that the agency is set to deploy arms to its operatives across the country.

The FRSC Head of Media Relations and Strategy, Mr Bisi Kazeem, said that the report was mischievous and seeks to provoke disorder in the society.

Mr. Kazeem said that the Corps Marshal, Boboye Oyeyemi’s recent statement was quoted out of context to suit the agenda of some unscrupulous elements.

He said the Corps Marshal was only lamenting the recent findings that 70 marshals lost their lives this year alone to some reckless motorists and was misquoted.

“The Corps Marshal only stipulated that such a high number of loses could have been avoided if FRSC personnel were carrying arms as allowed by the law.

“But, he quickly added that there is no immediate plan to implement the law that permits the officials to carry arms.

“It is unfortunate that some wicked people now took that to mean that he said officials are now being armed; it is a figment of their imagination .” he said.

Kazeem said the FRSC boss was misquoted based on the rumour making round on the social media.

He said people even circulated a picture that depicted some road safety officials being drilled by the Nigerian Army on how to handle firearms.

He said the picture was dug out from trainings that took place years ago to make it seem as if it was part of a purportedly new arrangement to arm the officials.

Kazeem said the corps had been undergoing such training on regular intervals since 1992 during the administration of former President Ibrahim Babangida.

“We have never put the exercise as part of the general practice of our operation and we have no plans of implementing it in the nearest future.”

The spokesperson said an amendment to the FRSC Act in 2007 granted the road traffic managers the power to bear arms like the police and other security agencies.

He, however, said that previous corps marshals of the FRSC did not prioritise its implementation.

He, therefore, speaking to NAN, urged the public to ignore the reports that the corps had started distributing and mandating its personnel to carry arms.

Oyegun throws weight behind Buhari’s plan to borrow $29.9b