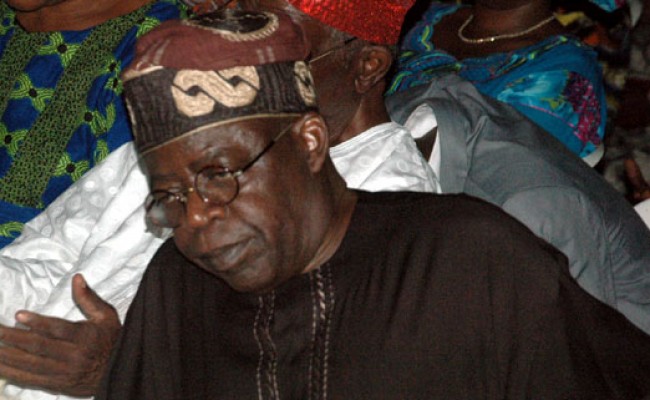 The Trade Union Congress of Nigeria (TUC) has condemned the push for the removal of subsidy by the national leader of the All Progressives Congress and former Lagos State Governor, Asiwaju Bola Tinubu [above].

The astute politician made the disclosure last Friday in Kaduna during the memorial conference organised in honour of the late Dr. Bala Usman.

For him the policy has overstayed its usefulness. The statement is not only unfortunate; it is rather ironic that it was made in the ten year anniversary of Dr Bala Usman, who gave up all privileges in the pursuit of common man’s happiness.

Were Bala Usman to be alive today, he would fight to ensure that the policy is not abolished without functional refineries.

The subsidy is an accepted policy the world over targeted at specific items to either fusion the effect of harsh environment for the benefit of the less privileged or to encourage people into less attractive but important aspects of national economy.

Thus most countries in the world subsidise most commodities to benefit their citizens. BUT unfortunately the masses of the country never benefited from it, no thanks to the cruel and insensitive posture of successive leadership.

The title of the conference, “Towards the economic liberation of Nigeria, Bala Usman’s enduring relevance” no doubt is a good one and we commend the Centre for Democratic Development, Research and Training, Zaria, for coming up with such a wonderful idea.

We are pained by the fact that most people who now make case for subsidy removal were the “many demons” according to the politician that clog the wheel of progress in the oil and gas sector.

Until death, our comrade Dr. Usman stood for the masses. Naturally Nigerians are not wicked neither are they greedy people. It is the system that has made us what we are today.

For subsidy it is so far so bad. It has ripped us off our peace, our jobs, properties, infrastructure, medical facility, portable water, and every programme that benefits the poorest in the country.

Now that the price of crude oil has dropped we must begin to use the little money we have more wisely. Let us begin a process of a thoughtful but decisive way of spending our money, and think out of the box rather than take us through another round of avoidable economic and social crises that will result from removal of subsidy.

That statement was rather unfortunate, coming from the leader of a party that rode to power on the crest of the masses!