Welcome to a new Legislative Day in the Senate of the Federal Republic of Nigeria!

Senate President, Dr Ahmad Lawan leads the Principal Officers into the chambers; takes the official prayers; and begins the day’s proceedings at 10:25am.

Senator Theodore Orji raises a petition on behalf of a constituency member on his unlawful dismissal from the Police Force.

Senate President, Ahmad Lawan refers the petition to the Committee on Ethics, Privileges and Public Petitions to report in 2 weeks.

Senate now moves into the presentation of Bills for first reading.

Senate now moves into the consideration of Bills for second reading.

1. A Bill for an Act to establish the Federal Polytechnic Orogun, Delta State to provide full-time courses in technology, applied science, management and other fields of studies and to make provisions for the general administration… 2019 (SB. 34) by Senator Ovie Omo-Agege

“I rise to second the motion that this Bill be taken for the second reading. This is a straightforward Bill. The Bill should be given expedient hearing and should be passed.”- Senator George Sekibo.

“This is a straightforward Bill and should be sent to the Committee level. I support this Bill, education is paramount.”- Senator Philip Aduda.

“The whole world is now going digital, any attempt to create that awareness to our younger ones should be supported. For that, I want to support this Bill & I want to implore my other colleagues so this can be sent to the Committee for further deliberation.”- Sen. Ibikunle Amosun

“The facts speak for themselves and I need to say clearly that I support this Bill wholeheartedly.”- Senator Sandy Onor.

A Bill for an Act to establish the Federal Polytechnic Orogun, Delta State to provide full-time courses in technology, applied science, management and other fields of studies and to make provisions for the general administration and other related matters, 2019 (SB. 34) is read the Second Time.

Senate President, Ahmad Lawan refers the Bill to the Committees on Tertiary Institutions and TETFUND to report in 4 weeks.

“Let me congratulate the DSP Ovie Omo-Agege and all those that contributed to the Bill, the time has come for this country to look into the direction of relevant education. Our assistance has to be functional.”- Senate President, Ahmad Lawan

“This Bill seeks to train young people in the educational sector of the economy and we should extend this beyond the federal polytechnics. We just have to do the same and no amount of investment will be too much.”- Senate President

Senate moves into the MOTIONS of the day. 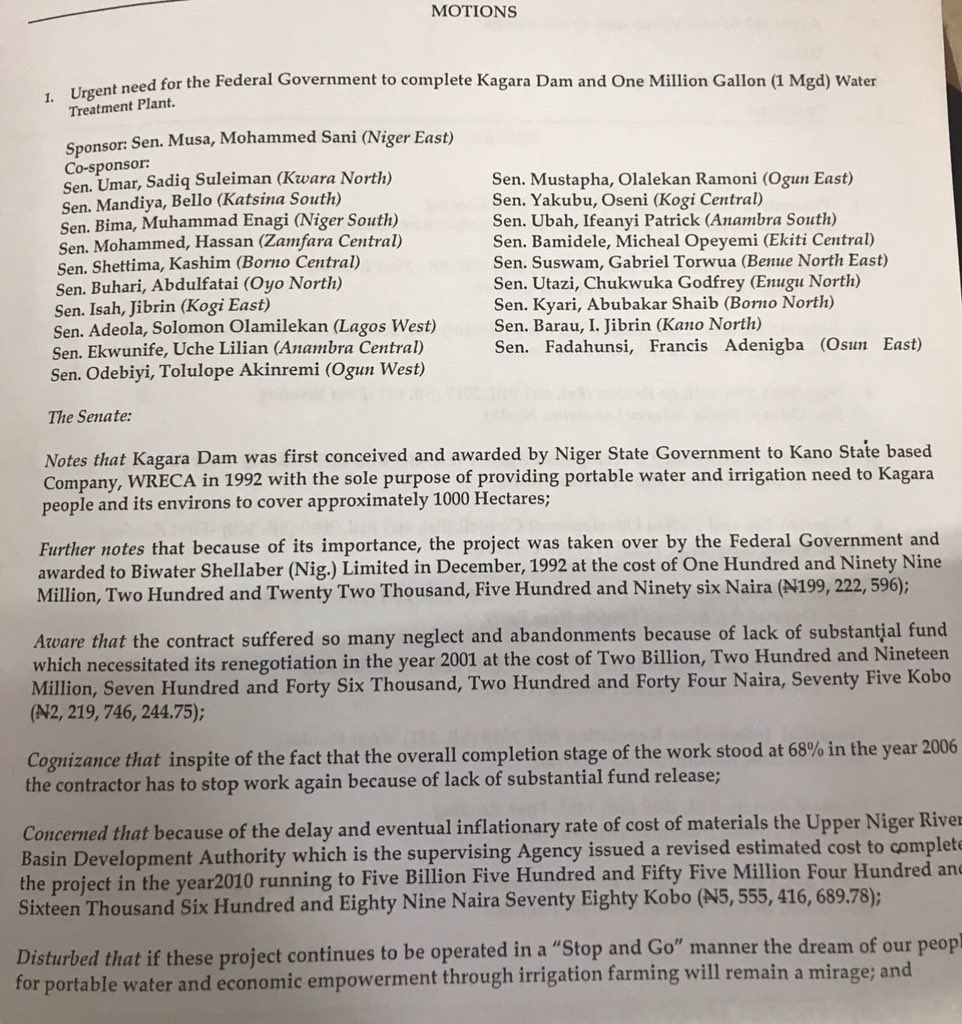 “I support the need for this project to be completed, let me point out that this area is rich in mineral resources and with the project of this nature, it will serve the people of the community with clean water.”- Senator Aliyu Sabi.

“I therefore call on my colleagues to support this motion in totality.”- Senator Aliyu Sabi.

“Once a new government is coming in place, they must continue with projects their predecessor started.”- Senator Uche Ekwunife.

“What needs to be done is to send this Bill to the Committee. I want to support this motion and move the prayers.”- Senator Philip Aduda.

“For a project of this magnitude to be abandoned, it calls for a critical review. I am in support of this motion, every prayers here should be approved and forwarded to the Committee.”- Senator Christopher Ekpenyong.

1. Mandate its Committee on Water Resources to investigate the delay behind the delay in the execution of the projects since the renegotiation only the year 2001 despite budgetary allocations over the year and report back to the Senate for appropriate actions;

2. Call on the Federal Government to consider the socio-economic importance of the project to the life of the people and the extent of the work done so far and see to the completion of the project without further delay.

“It is very important that we continue to oversight when we legislate; having passed this resolutions we also need to follow it up. Let me congratulate all our colleagues who have contributed to the debate in this motion.”- Senate President, @DrAhmadLawan

2. Illegal security activities by Messrs OMSL Limited at the safe anchorage area of Lagos ports and the need to investigate their excesses by Senator George Sekibo. 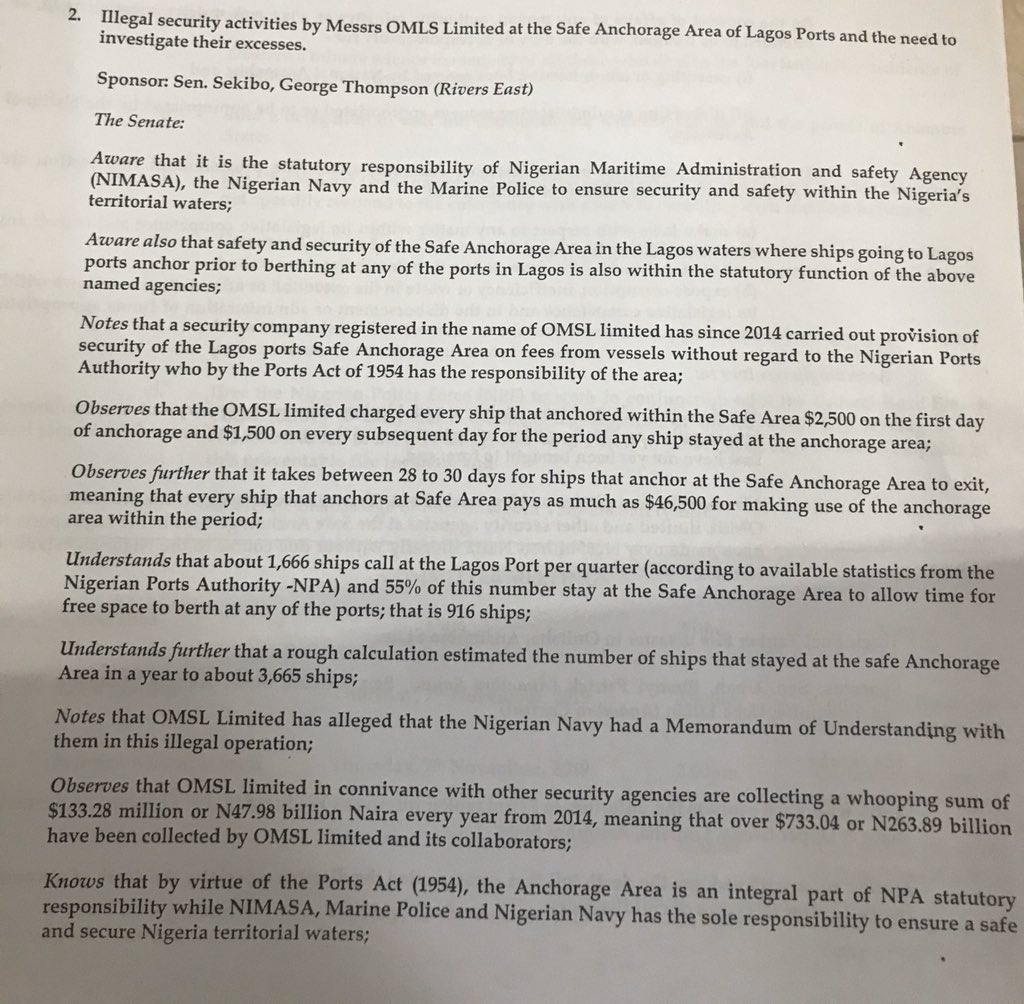 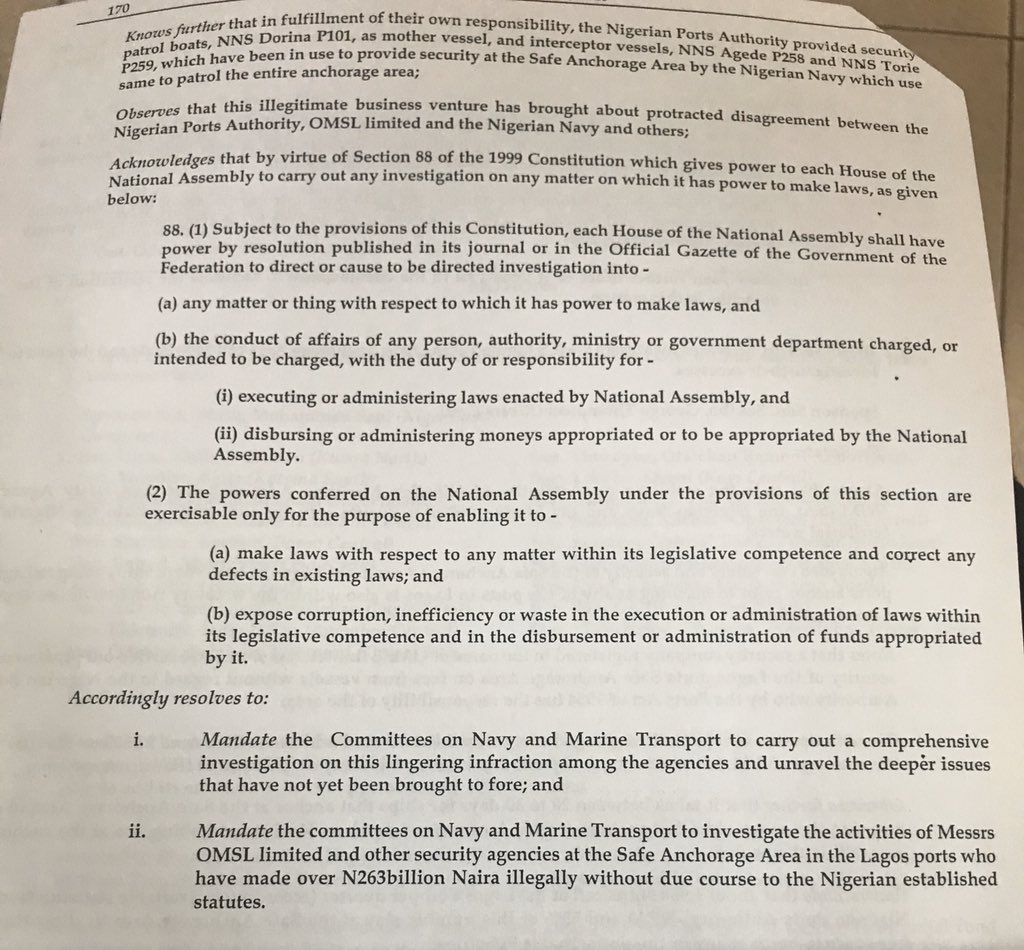 1. Mandate the Committees on Navy, Marine Transport and Finance to carry out a comprehensive investigation on this lingering infraction among the agencies with a view to resolving security impasse to brink the nation; and

2. Mandate the Committees on Navy, Marine Transport and Finance to investigate the activities of Messrs OMSL Limited and other security agencies at the safe anchorage area of Lagos ports to determine the legality of their claim and report in 4 weeks.

“Our Committees on Navy, Marine Transport and Finance you have a big task, in 4 weeks we expect you would have conducted a serious mandate and report to the House the Senate. Committee on Navy will be the lead Committee.”- Senate President, @DrAhmadLawan 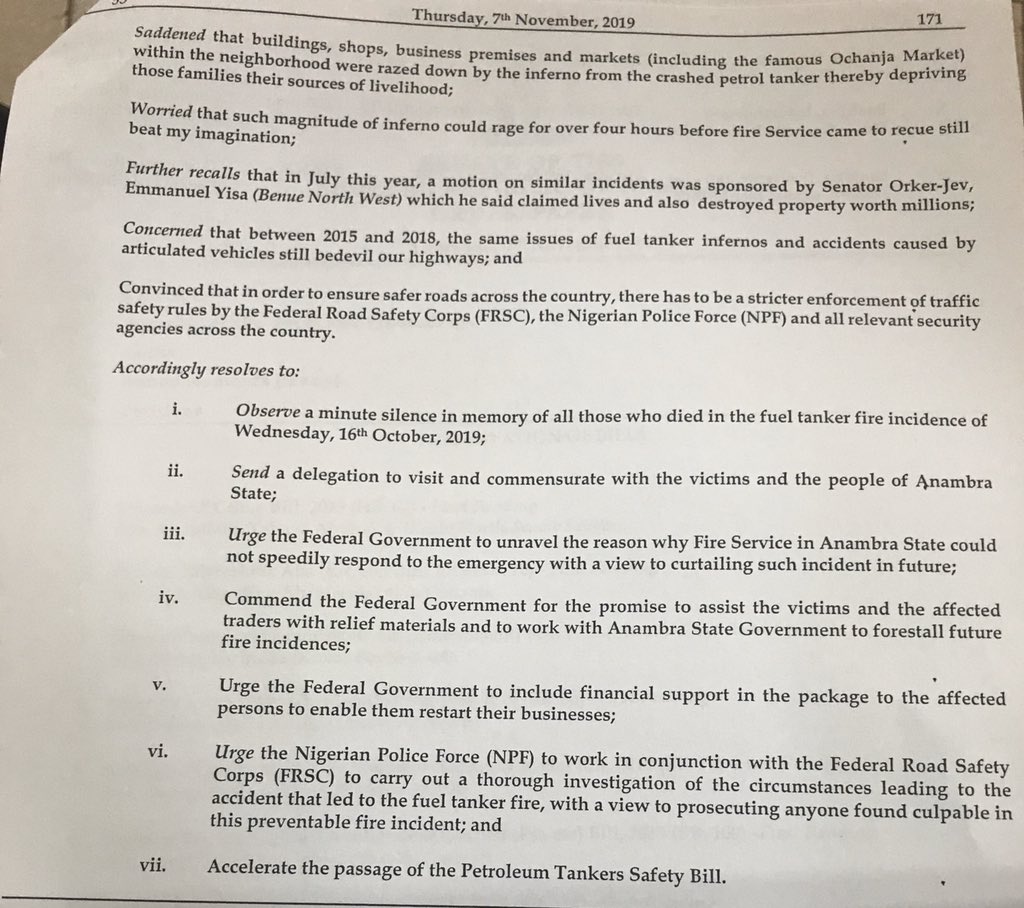 “The incident is a sad one. We need to ensure drunk drivers do not drive. We urge the Federal Government to intervene. Every market of this size must have a huge presence of Fire Service.”- Senator Stella Oduah.

“FRSC should be looking at the quality of our drivers that drive our lorries and the vehicles, the fire service should provide fire equipment in all major markets across the country, so that if it happens there will be immediate solution.”- Senator Uche Ekwunife.

“All the prayers should be taken and the amendment that fire service should be provided in all the major markets should be approved.”- Senator Uche Ekwunife.

“On behalf of the good people of Enugu, I commiserate with those that have lost their lives and for those injured I pray for quick recovery and the resuscitation of those who lost their valuables.”- Senator Chimaroke Nnamani.

“We should look at ways of preventing this avoidable incident, it is important we look at response mechanism of Nigeria in response to emergency. As legislators, it behooves on us to make far reaching input to avert this.”- Senator Francis Ezenwa.

“We also have to look at the state of our roads to be sure that such thing will not happen again. Most important, I think we should look at moving inflammable products by pipeline- it is safer and more convenient and it is the way to go.”- Senator Francis Ezenwa.

“Fire is now our greatest enemy, since we know what is going to kill us, we have to fight it to survive. The vehicles that are not worthy should be put off the road. The drivers that drive these vehicles are on drugs.”- Senator Theodore Orji.

“It is for the relevant agency to screen these people, call on both LG and FG to look at those roads that are critical and put them into shape. In terms of equipment, fire service vehicles are obsolete and should be fully operational.”- Senator Theodore Orji.

“The Onitsha market is very important, it is time for us to find a way of letting people understand that insurance is key to us.”- Senator Ike Ekweremadu.

“The time has come for Anambra state to develop Onitsha into a modern city.”- Senator Benjamin Uwajumogu.

“We should do whatever we can and empower the fire service in all the States. Let’s also call every State govt because this is a joint task.”- Senator George Sekibo.

“There is a need to ensure that tanker drivers are certified and they should not drink, that goes to the FRSC to be testing our drivers on the high way to ensure they are not under drugs.”- Senate President, Ahmad Lawan

“It is a major responsibility of each State to take the lead on fire outbreak. Anambra State Government to ensure the roads leading to the market are widened, Federal Government can provide support and states must never shy away from their responsibilities in the true spirit of true federalism.”- Senate President, Ahmad Lawan

1. Observe a minute silence in honor of all those who died in the fuel tanker fire incidence of Wednesday, 16th October, 2016;

2. Send a delegation to visit and commiserate with the victims and the people of Anambra State;

3. Urge the Government of Anambra State to unravel the reasons why Fire Service In Anambra State could not speedily respond to the emergency with a view to curtailing such incident in future;

4. Commend the Federal Government for the promise to assist the victims and the affected traders with relief materials and to work with Anambra State Government to forestall future fire incidences;

5. Urge the Federal Government to include financial support in the package to the affected persons to enable them restart their businesses;

6. Urge the Nigerian Police Force (NPF) to work in conjunction with the FRSC to carry out a thorough investigation of the circumstances leading to the accident that led to the fuel tanker fire, with a view to prosecuting anyone found culpable in this preventable fire incident;

7. Accelerate the passage of the Petroleum Tankers Safety Bill; and

8. Urge the Federal Government through the Fire Service to provide fire fighting equipments in all major market.