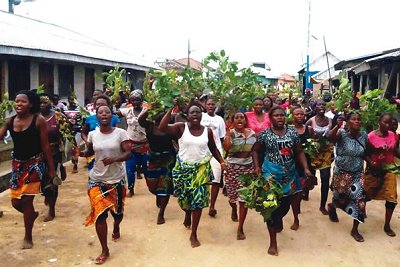 Residents of Oporoza, the traditional headquarters of the Gbaramatu people on Saturday, protested massively against the invasion of the village by troops.

Operatives of the Joint Task Force code-named, Operation Delta Safe, for the second time in two weeks, raided the village.

The operatives allegedly broke into some homes in search for militants in the region forcing scores of residents to flee and take cover in the bush.

Soldiers reportedly besieged the area in five gunboats around 9:20am also invaded another community in the Warri South-West Council Area of Delta State.

The raid is coming on the heels of elders and stakeholders of the Niger Delta meeting with President Muhammadu Buhari on the way forward for the region.

The raid on Oporoza might not be unconnected with the renewed attacks on oil facilities around Batan area of the council.

The troops left for another neighbouring community, Tebijor, and carried out a similar operation, when they could not arrest any of their targets at Oporoza.

Residents said that many of the people who fled into the bush for cover including women and children had not been seen as of 3:45pm on Saturday.

They called on the Federal Government to halt incessant harassment of his kinsmen because many of them were already traumatised and in pains.

Meanwhile, women from Oporoza have protested the invasion of their community by troops of the Nigerian Army.

Niger Delta militants have vowed to chase away oil companies from the region should the Federal Government order another invasion of Tompolo’s community.

Playboy, in his statement on Saturday, said it was shocking that soldiers could invade Tompolo’s community.

He said, “If it is true that his (Tompolo) house was raided, then President Buhari must stop it.

“If he does not stop, what we will do is to chase away oil companies in our land. We cannot be feeding Nigeria and at the same time be humiliated by Nigeria.”