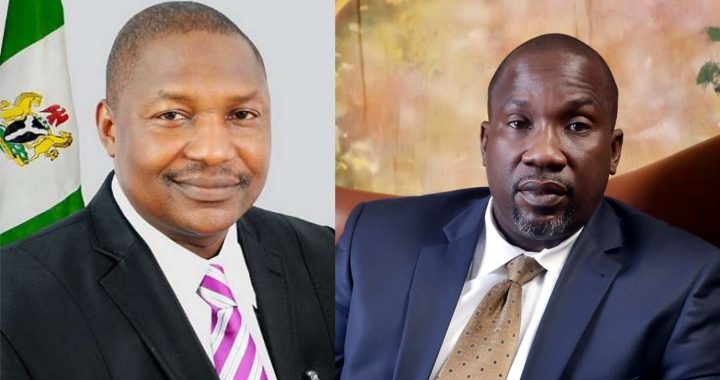 Foremost whistleblower and anti-corruption crusader, Dr. George Uboh has showered praises on the Attorney-General of the Federation [AGF], Abubakar Malami (SAN) on the recent court order against the banks.

Elombah.com had, on 21 October, reported that federal government secured court order to freeze the account of all those that have bank accounts in Nigeria with no associated Bank Verification Number [BVN].

According to the report, the federal government gave a directive two years ago urging all Nigerians to identify themselves with the newly instituted process called BVN.

With this new court order, one stands to lose money if one has not processed the proper identification.

He said that Malami is now a fearless anti-corruption fighter who has surpassed his predecessors.

Says the below achievements by AGF Malami are unprecedented and unparalleled:

Willingness to set up an Assets Management Agency (thus divesting the EFCC of such meaningless and draconian powers);

Willingness to obey court order to publish names of looters; and,

It would be recalled that Dr. George Uboh coined the phrase “Banking Sector Mafia” in describing the corruption at the banks when he was engaged by AGF Malami in 2016.

He later repeated same phrase in his two open letters to President Buhari in 2016 and 2017 and in his news bar messages to Vice President Osinbajo in 2017.

That was when Osinbajo was the Acting President during which time Osinbajo openly called the banks corrupt and must be sanctioned.

He posited that he had harbored a secret benchmark he would use to judge anyone in the fight against corruption, which is the might to go after the banks.

Uboh opined: Nigerians must understand that all the anti-corruption measures like the FOI Act, whistleblowers policy etc. cannot work until the government comes down hard on the banks.

Of course, the first step is the judiciary which Malami just did.

Uboh cautioned Malami, however, that while the court judgment is a victory, he (Uboh) does not expect the banks, which have a history of being recalcitrant, to comply.

He also alleged that Bank MDs and MDAs have siphoned billions in USD offshore, some of which are in his possession.

He added that Access Bank expunged four-year statement for and on behalf of the EFCC, and numerous other fraudulent and despicable activities.

He recalled that when George Uboh Whistleblowers Network (GUWN) sent the Ministry of Justice request to furnish inflow and outflow early this year, that AGF’s office complied while numerous MDAs did not.

This, according to him, means that AGF Malami is not only promulgating anti-corruption policies.

Rather, he is also complying and living by example, same way he is complying with SERAP’s court victory compelling the government to publish names of looters.

Uboh hopes and urges Malami to maintain the tempo and predicted that if he does, his name will be written in gold in the history of anti-corruption fight in Nigeria.

Uboh stated that he is now ready, willing and able to defend Malami anywhere because Malami’s recent actions have spoken louder than words.