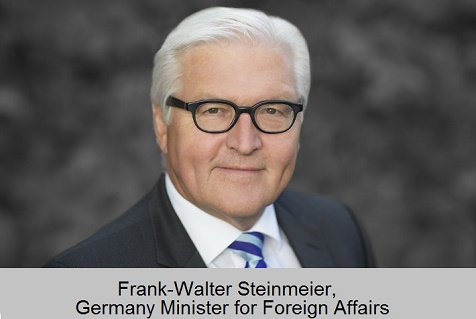 The German Foreign Affairs Minister Mr. Frank-Walter Steinmeier is paying a one-Day official visit to the ECOWAS Commission on the 10th of October 2016 in order to consolidate the growing cooperation between Germany and ECOWAS.

In this vein, Mr. Steinmeier will be holding discussions with the president of the ECOWAS Commission Marcel de Souza specifically on advancing collaboration in the areas of peace, security and trade.

Matters of common interest covering a wide range of issues that border on human development and economic integration would be discussed during the meeting which is also being held in preparation for an upcoming German-ECOWAS summit.

The German Foreign Minister’s coming to ECOWAS at this point in time is in furtherance of the partnership between ECOWAS and Germany to unite West African people and help the states in the region attain greater peace and stability, while reaffirming the place of democracy, human rights and good governance within the context of emerging global realities.

Frank-Walter Steinmeier has been Federal Minister for Foreign Affairs since 17 December 2013. He was previously the deputy Chancellor and head of federal Chancery as well as the chair of the Social-Democratic Party (SPD) parliamentary group of his country after he had been State Secretary in the Federal Chancellery and Commissioner for the Federal Intelligence Services.

Born on the 5th of January 1956 in Lippe District, Germany, Mr. Steinmeier was initially educated in Blomberg and proceeded to read Law and Political Science at the Justus‑Liebig‑Universität in Giessen after a military service which took place between 1974 and 1976

He was also the Desk officer for media law and policy, State Chancellery of Land Lower Saxony as well as being Head of the Office of the Minister-President of Land, Lower Saxony.

This would be the second visit of Mr. Steinmeier following his earlier courtesy call on the 27th of October 2014.

In February this year when the German president Mr. Joachim Guack paid a working visit to the ECOWAS Commision, he pledged continuous support for the various programmes and projects of the regional group, towards attaining the integration goals of the West African region.

German Chancellor Angela Merkel had also paid an official visit to the ECOWAS Commission in 2011.

Mr. Steinmeier has on his delegation, senior government functionaries and ambassadors, protocol officials, security personnel as well as journalists.

Senate frowns at invasion of judges’ residence by DSS [updated]