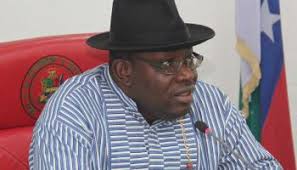 Bayelsa State Governor, Hon. Seriake Dickson over the weekend undertook an unscheduled inspection tour of some ongoing projects within the state capital to assess the level of work, in line with their qualities and specifications.

Speaking shortly after the inspection with Government House correspondents, Governor Dickson expressed satisfaction with the pace and quality of work at the project sites and commended the contractors handling the projects for their commitment and diligence towards the completion of the jobs.

The Governor, who noted that, the government was determined to bequeath what he described as legacy projects that would enhance the standard of living of the people, lauded the communities, particularly the youths for their peaceful disposition and support, as there had been no cases of disruption at project sites.

His words: “In spite of the distractions and funding challenges we are still moving on. I am very impressed with the pace and quality of work and I want to commend the ministries and officials that are handling it and the communities that are giving communal support and encouragement. I want to assure our people that we are trying our best; we mean well.

“We want to leave behind legacy projects; projects that can stand the test of time, so that, succeeding governments can focus on other issues, that is why, every infrastructure we are putting down is of world class and we are using competent contractors for that purpose. There is still a lot to be done no doubt, but, by the grace of God, we are determined to see all our projects to completion for the benefit of our people and to the glory of God.”

Governor Dickson, who urged the contractors to sustain the pace of work, assured the people that, his administration was committed to delivering state-of-the-art facilities to boost the infrastructural base of the state for the benefit of mankind.

Projects visited were the Ox Bow Lake Pavilion, Igbogene bye-pass, Ecumenical Centre and the Gloryland Drive Phase 11 and also inspected the land acquired by government along Daewoo road, off Ox Bow Lake as well as the area proposed the International film village at Igbogene.

NBA declares state of emergency in the judiciary over DSS raid