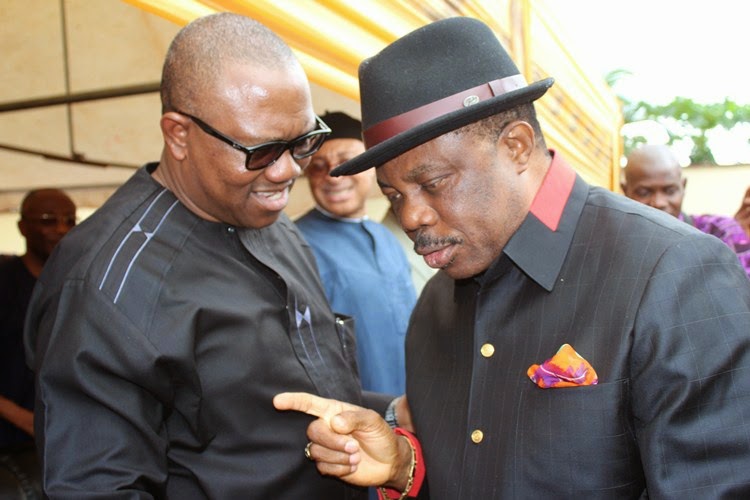 Thanks for whatever good you people do for the progress of our dear State. It is important to inform you that Anambra people expect more from you. Most of us believe that you are very pliable to the HE thus allowing things to go bad. You can start today to renew your images as individuals or collectivity.

The immediate provocation for this open letter was the event of Monday, the 9th of November, 2015. On the said date, I got the information, which I verified, that Governor Willie Obiano discussed the issue of borrowing with his EXCO members. He has a prepared document on the borrowing and the falsification of the true state of Anambra finances which he showed to some trusted friends. I also gathered that having wasted the monetary part of the 75 Billion Naira of cash and investment   bequeathed him by Mr. Peter Obi, he now goes about with his Adviser, Mr. Mark Okoye falsifying figures to prove that what was bequeathed him was not what it was actually said to be.

Having fired those connected to Peter Obi leaving only Mark shows that Mark is performing some interesting roles, off course against Obi, for him. However, this is not my concern. For foisting an incompetent Governor on Anambra people, Mr. Peter Obi, in a manner of speaking, deserves what he is getting. Neither his interest nor that of Obiano is my worry, but what happens to our State ultimately.

It is painful that during the EXCO, not one person raised an argument on why he should not borrow. Even his usually outspoken Deputy, Dr. Nkem Okeke kept mute. They said that since he was treated so shabbily by the same Obiano for questioning the variation of the 3 flyovers Obiano is building from 5 Billion to 15 Billion, the man now keeps to himself.

It is even more painful to hear that he had earlier met with you people on the same subject : approval of borrowing for   him.

Surprisingly, everybody is keeping quiet. I must here thank Mazi Odera of APGAALAIGBO for exposing such secret deals. When I read this particular deal on his facebook account, I was relieved and encouraged.

I also gathered that he met with the MDs of all the banks in Nigeria  today, the 10th of November, 2015, for he is ready to borrow from any financial institution that will lend him money for what he calls  “infrastructural development.”

In the document he is bandying about, he is trying to show that he did not meet a very healthy State, which is false.

In the said document, he questioned the rationale, and falsified the true state of things, in  Mr. Peter Obi’s investment in Nigerian Independent project, Orient petroleum, the Malls at Awka, Onitsha and Nnewi; the Onitsha hotel and Agululake Hotel.  He also did so on Anambra’s investment in INTAFACT, Onitsha Business Park 1 and 2,Anambra State Independent Power Generating Company, Eforce LTD, Emenite, Quoted Investment, Bank of Industry, Micro credit Banks, foreign currency investment, among others.

I will use two examples of the falsehood he tried to sell to you to demonstrate his character and disposition:

1. In one of the items he circulated, he added the 10 Billion Naira in his handover note as part of the 75 Billion that was bequeathed to him. The aim is to prove that since the money was not received, that it should not be counted.

Those of you who have seen Obi’s handover note which off course is a public document know that he stated as follows:

Estimated liability, including March salaries, Pension, Gratuity and certificates raised on work completed to be 5,000,000,000

When you now remove the last two items, the money was 75 Billion that was clearly stated as money and investment left for Obiano.

2. Concerning the foreign currency investment, Obiano wrote: “During the final months of the last administration, the State invested a total of US$155 m (N26.5 Billion) in Eurobonds and other foreign denominated securities held with Access Bank, Fidelity and Diamond Bank. Given the current decline in capital markets, this portfolio of Eurobonds had a market value of approximately US$132 (N26.4 Bn), reflective of prices dated September 21, 2015. If ANSG were to liquidate the portfolio, the State would incur a US$ loss of US$32 m (14.8%) and a Naira loss of N100m, respectively.”

Before I deplore figures to prove that he has just written nonsense and should immediately sack the person that prepared that document for him, let me make the following comments:

The investments made by the former Governor, His Excellency, Mr. Peter Obi in Eurobonds was to ensure that succeeding Anambra State Governments enjoy a stable revenue for the next 5 to 7 years and even subsequent governments can decide to reinvest the proceeds when the bonds mature. The investment was therefore made with the intention of holding them to maturity, “hold to maturity” and not a “trading portfolio”, which is marked-to-market on a daily basis. If it’s a trading portfolio, the Managers would ordinarily sell when the price is most favourable but for an investment that is classified as “hold to maturity” the government is to receive income during the tenor of the bond and FULL Principal/Capital invested repaid at maturity.

It should be stated clearly that in the case of bond investment, the Principal repayment at maturity is NEVER DIMINISHED in value if held to maturity.  If however the state government wants to sell the bonds, its advisers should have told the Government that interest rates are currently going down and that the Government should wait for rates to go further down so as to maximise return and value for the citizens of Anambra state. It will amount to throwing away Public money if the bonds are sold at amounts that are below their value at a time when investors are on the hunt for yield following Federal Government’s expansionary Monetary and Fiscal stance.

Gov. Obiano should know that those of us in the financial industry are happy over what Obi did for the State. Many of my colleagues and I have been following the investment because we are involved. To educate him and the junk that prepared that document for him, I have done a detailed anaylsis of the foreign currency investment using facts and figures. See it:

1. Why did he appoint Afrinvest, a company owned by the Obasekis to manage the portfolio?

2. The portfolio has so far yielded US$ 20,293,114 (N8, 758,622,951), why did he not tell the EXCO and House members this and what has happened to the money? If he did not show them how and where it was re-invested or gainful capital project it was used to carry out, it is either it has been wasted or somebody is planning to be funny with it.

3. Somebody spent years saving money for the State, only for his predecessor to come with faulty analysis of the savings rather than tell the House and Anambra people what he himself has saved. Is he immune to savings? After all he has increased the IGR by over 1 Billion Naira.

1. It is good to note that the initial investment in INTAFACT had tripled in value.  Anambra investment there is about 10 Billion Naira in value. The money he said he invested was money approved and released by Obi before he left, which he blocked to appear he was the one that released it.

2. Obiano talking about sale of foreign currency saved by Obi. He should be told that the savings were meant to mature and earn interest for the State and not to be sold.

3. Seek from Orient Petroleum the details of Anambra State investment in the company and see his lies. Every day he dances with his wonders in oil and gas but has not invested 1 kobo in any oil and gas business for the State. He talks about State Government equity which Obi claims, but the fact is that the Government paid compensation amounting to  the land appropriated from the people.

4. Are you aware that he has sold Onitsha Hotel to his front, Capital Developers

5. Thank God he acknowledges that he has not invested I kobo  in Onitsha Mall, but he is already preparing for its commissioning as if he financed the project

6. On Anambra State Independent Power Generating Company, Obiano exposed his cluelessness. So he knows of such project and what Obi has invested and still went on, without evaluating it, to announce he will build 3 power generating plants in his inaugural speech?  I thought he said he had commenced building of power plants. Meanwhile, I reached Denca people and they confessed that Anambra Government has never approached them.

On the contracts Obi awarded.

In Obiano’s paper, he said he inherited contracts worth 185 Billion Naira from Obi and has paid 46.8 Billion, which is 50% of total FAAC revenues. Where did he get the money if he is truthful? He is merely trying to offer reasons for wasting the money left for him. He said that the 155 dollars inherited have not been liquidated to fund any payments on certificate.  So if he recognizes that in Governemnt, we talk about certificate generated, he should agree that Obi did not owe on any certificate generated for work done while he was in office.

The irony of the man is that after over taxation, he boosts that IGR has grown from 250 Million to 1.3 Billion, yet he says he receives less money.

He still says he attracted investment worth over 2 Billion Dollars. Where are those investors and where are the investments. He only signed empty MOUs.

He talks of money he has paid on inherited projects, but you and I know that he is yet to complete one project in Anambra State. He started 30 roads and abandoned all of them.

How can a man who takes Security vote of 1 Billion Naira per month have money for projects?

The conclusion of this is that Anambra is in deep shit.

Couple killed in SUV during sex; shooter sought them