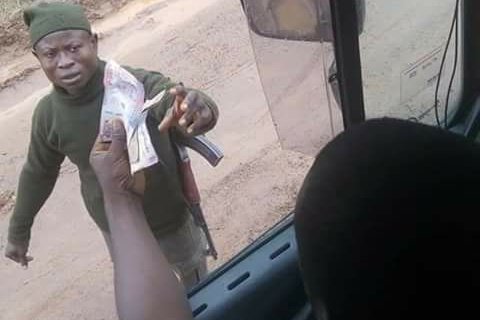 An Urgent Call To Southeast Public Office Holders: Before The Jihadist Nigerian Army Collapses The Ailing Onitsha Niger Bridge And Turns Igbo Land Into A German Concentration Camp In The Guise Of “Operation Python Dance”

The leadership of International Society for Civil Liberties and the Rule of Law; abbreviated as INTERSOCIETY, respectfully write, in conjunction with the Southeast Based Coalition of Human Rights Organizations (SBCHROs) to draw the urgent attention of Your Excellencies and Distinguished Senator as it concerns a clear case of army of occupation by Jihadist elements in the present Nigerian Army in the Southeast Geopolitical Zone or Igbo Land as well as orchestrated plans by them to collapse the 51years Old Onitsha Niger Bridge; a major gateway to Igbo Land.

We make bold to say that the ulterior motives behind the referenced despicable and condemnable operations are for the purpose of Jihadism and Ethnic Cleansing.

Others are to cause social and economic strangulation of the Southeast Zone and collapse of Onitsha Niger Bridge built since 1965; for the purpose of cutting off the Igbo Land from the rest of the country; using the Southeast Roads as illegitimate money making venture by way of collection of illegal roadblock tolls and extortion; depriving the Christian dominated Peoples of the Southeast and the South-south Zones particularly those living outside the Zones of their sacred and constitutionally guaranteed rights to worship their Christian Religion and commemorate the birth of their Savior Jesus Christ by blocking and torturing them from returning to their ancestral homes by way of total blockage of the ailing Niger Bridge and deliberate creation of indiscriminate roadblocks; pushing the law abiding Igbo Race to the wall and forcing them to adopt radical reprisal approaches to pave way for full blown genocidal Jihadism against the  Race.

It is recalled that on Monday, 28th of November 2016, the Nigerian Army, dominated by Jihadist elements; dubiously announced the mass deployment of troops and equipment to all strategic roads and commercial centers including motor parks in Igbo Land, in the guise of “Operation or Exercise Python Dance”; saying it is targeting “MASSOB, IPOB, Fulani Herdsmen, Kidnappers and Armed Robbers”.

Before the dubious announcement, the Southeast or Igbo Land was laid under siege with not less than one hundred military and navy roadblocks and not more than 1000 police roadblocks scattered on all strategic roads and routes in the Zone.

The link below contains the first army statement under reference: http://newsexpressngr.com/news/31295-Army-reads-Riot-Act-to-IPOB-MASSOB-herdsmen-others.

In response, the Southeast Based Coalition of Human Rights Organizations (SBCHROs) and the Intersociety, issued a joint statement, dated 30th of November 2016, condemning in its entirety and totality the action of the Jihadist Nigerian Army.

The said statement of ours triggered off public outcries and more informed reactions; forcing the army through its 82nd Division in Enugu to issue another contradictory, defenseless and watery statement; claiming professionalism and routine in-service exercise.

In all these, the more the Jihadist army tries to justify its claims behind the atrocious operations, the more its ulterior motives are exposed.

Niger police command arrest couple for conspiracy and self…

We have, contrary to the claims of the Jihadist Army, investigated, found and come out with the following 37-Points Of Facts; shaming, rubbishing and exposing the false claims and ulterior motives of the Jihadist Nigerian Army and the Police:

(1) That the Jihadist Nigerian Army raised false insecurity alarms in the Southeast with ulterior or dubious intents;

(2) that street protests are not armed rebellion or traditional street crimes of kidnapping, armed robbery or murder, etc;

(3) that IPOB and MASSOB are not armed opposition groups waging war against the Federal Republic of Nigeria or any part thereof;

(4) that Southeast Zone is the most peaceful Zone to live in Nigeria; as clearly attested to by a recent UN Report and it is not a war zone or a zone at war with the Federal Government or Federal Republic of Nigeria;

(5) that there are no security threats of unprecedented proportion or Northeast magnitude in the Southeast Zone warranting the present military siege or police state in the Zone.

(6) That  the Jihadist Nigerian Army is crude and an illiterate army with no knowledge of the meaning and definition of Rules of Engagement;

(7) that  the Jihadist Nigerian Army has  continued to criminalize and stigmatize the nonviolent activities of IPOB to the point of saddening and alarming proportions;

(8) that while the Southeast, which is a Zone in peace and non war Zone is being hunted, persecuted and pushed to the wall; the troubled Zones like Northeast and violent groups like the Fulani Janjaweed are being cuddled, petted and protected (i.e. see military roadblocks along Umuahia-Aba Federal Road and blanket protections provided to Fulani cattle rearers and their herds of cattle where cattle are valued more than lives of road users on Southeast Roads).

(9) That the Jihadist Nigerian Army and its Commander-in-Chief are killing, wounding, torturing and persecuting citizens of the Southeast Zone that have chosen nonviolence and law abiding living; whereas violent entities and Zones including Boko Haram and Fulani Janjaweed are being rewarded and given presidential treat and protection;

Niger police command arrest couple for conspiracy and self kidnapping