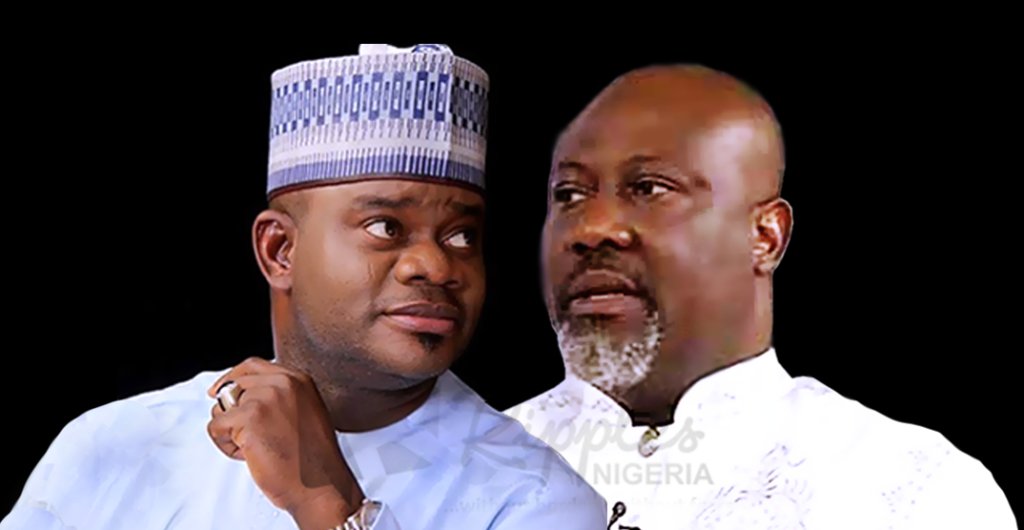 The National Democracy Watch & Advocacy Group has thrown its weight behind the Senator representing Kogi West Senatorial district in the Senate, Senator Dino Melaye over recent moves to recall him from Senate.

The group declared their stance in a statement signed by its National President, Elder Fred Akpewe and National Coordinator/Secretary, Mr Martins Okoro and made available to Elombah.com.

In the statement titled “The Futility Of Dino Melaye’s Recall”, the group said that Senator Melaye is being haunted because of his “consistent insistence not to join Yahaya Bello in impoverishing his state of Kogi.”

On the other hand, the group stated that “since Yahaya Bello became Governor he has plunged his state into one crises or the other in a bid to become the imperial Majesty of Kogi State.

They said that “very soon, Governor Yahaya Bello would be on his own as prominent Kogi State indigenes and stakeholders are against the recall and are embarrassed by the Governor’s poor understanding of what governance is all about.”

In conclusion, the group warned that “if Dino is allowed to go, this idea of Governor’s sacking any legislator they disagree with will become a trend and will only spell doom for our democracy.”

Read the full statement below:

For more than a week now the media space has been polluted with a vindictive and fraudulent recall process being orchestrated by the Governor of Kogi State, Yahaya Bello against Dino Melaye, the Senator representing Kogi West Senatorial district in the Senate.

It is no longer news that this latest round of drama is the culmination of the frosty relationship that exists between Yahaya Bello and Senator Melaye.

We are worried about this embarrassing scenario, especially in the league of democratic Nations.

Yet, looking into the situation from a dispassionate view, one is bound to ask – what is actually the sin of Senator Dino Melaye?

Right from when Melaye was in the House of Representatives and up till today, the Senator had always insisted on good governance in Kogi State especially and Nigeria in general.

He has thus on different occasions championed anti-corruption campaigns as reflected on his sponsored bills and motions in the House of Representatives and the Senate.

What we are seeing today is Dino Melaye’s consistent insistence not to join Yahaya Bello in impoverishing his state of Kogi.

It is no secret that since Yahaya Bello became Governor he has plunged his state into one crises or the other in a bid to become the imperial Majesty of Kogi State.

This did not stop him from owing the state workers 15 months salaries. Many of the state owned institutions have been closed down in spite of being a beneficiary of the Federal Government’s bail-out funds and also the Paris club refund to states.

The Kogi Chapter of Nigeria Labour Congress supported by the NLC Abuja is literally at war with the Government of Kogi State. Kogi State is now adjudged one of the worst governed states in Nigeria.

Nothing is working in the state and Dino Melaye and other progressives have vowed never to remain silent in the face of this gross mis-governance.

It is therefore, outrageous that rather than commit himself to revamping his ailing State, Governor Yahaya would devote his entire energy, state resources and time to a futile and fraudulent recall process of Dino Melaye that would further plunge the state into unimaginable debts.

Besides, this is a Chief Security Officer of a state who is now the prime architect of insecurity in his own state.

Yahaya’s acute sense of insecurity has turned Kogi State to a volatile one as he continues to project his fear unto others.

Analyzing Yahaya Bello’s flawed reign as Kogi State Governor can take 50 chapters of a book covering all the unpalatable ramifications of his totally inglorious term in the saddle.

Yet, Yahaya Bello would like to tell us what is in a book simply by looking at its cover. Here is a complete opportunist of a failed Governor who clearly does not understand what democracy is all about.

While enjoying perks of the office of a governorship he neither earned nor deserves in any way, he shows absolutely no interest in understanding our constitution and its dictates pertaining to that office and its proper relationship with other arms of government.

If we may ask, “what does Governor Yahaya really want, in the first place?”

Perhaps, his desire is that the laws should be amended by the National Assembly so that he can have the sole right to choose those to represent Kogi State in the Senate, House of Representatives, the House of Assembly, Local Government Chairmen and Councilors as well!

This may be the only way he can exercise his powers as sole administrator or emperor of a poverty stricken state he has only succeeded in running further aground.