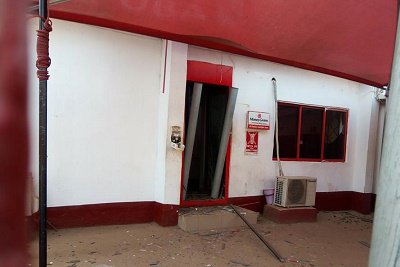 The robbers, who came on a black Toyota Highlander, blew up the bank entrance with dynamite explosives and immediately got down to business.

The bullet-proof door of the bank went down in shreds while the shattered glass missiled off.

The robbers, who did not bother to cover their faces, operated freely without interference from security operatives.

On arrival, the robbers separated themselves in various groups with different assignments while raining bullets from various caliber machine guns non-stop.

The electronically powered door of the bank came down with its glass shattered, flying off as missiles.

The robbers later vanished on a Toyota Highlander through Ukpor-Isekke road, firing sporadically into the air.

No death was recorded except a local market woman and a policeman that were reportedly injured.

The case for pro-Biafra agitators in Nigeria – by Onyiorah Paschal