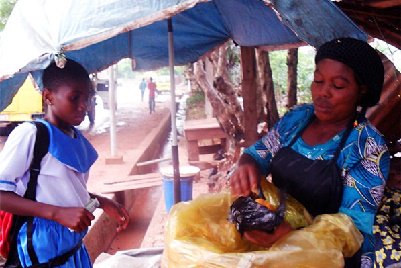 In another rollout of one of the Social Investment Programmes of the Buhari administration, the National Homegrown School Feeding scheme has entered implementation stage with the feeding of primary school pupils in Anambra State today.

This was contained in a press release by the Senior Special Assistant on Media & Publicity in the Office of the Vice president, Mr. Laolu Akande.

Meanwhile, no one should have to pay any fees to benefit in the N-Power or the Homegrown School Feeding programmes, and any such imposition or request for fees is uncalled for and illegal.

Reports of such acts of extortion in some states where beneficiaries are being asked to pay a ‘fee for registration’ have reached the Presidency, and firm instructions have been given that such acts should stop.

Adebayo said primary school pupils in Anambra were excited as the feeding started in their schools.

Adebayo led a team of federal and state officials to some of the schools on day one of the Homegrown School Feeding Programme implementation.

“The pupils were excited and enjoyed the meals,” he stated.

He added that the cooks in those three schools, among the total 774 already recruited and trained for the feeding programme, served ‘Okpa’ a.k.a Moin-moin garnished with vegetables.

The feeding delight of the pupils took the meals during their break time about noonday.

All together in Anambra State, an estimated 76, 690 pupils in 1050 schools would be served every day of school.

The feeding programme caters to pupils from primary 1-3.

Having met the stated requirements for Federal Government funding for the Homegrown School Feeding, a sum of N53, 687, 900 had been released directly to cooks for the kick-off of the school feeding programme in Anambra, to last till the end of the current school term.

All the cooks were recruited from communities around the primary schools for the program, verified and trained to provide the catering service in the 21 LGAs in the State.

Generally, the Homegrown School Feeding programme, which is one of the Social Investment plans of the Buhari presidency, is driven through community participation where residents in the community are engaged as cooks to provide feeding services.

Also the programme leverages on the agricultural produce available within the communities.

The Homegrown School Feeding programme of the Buhari administration will boost school enrollment and improve the nutritional status of the pupils.

It would also stimulate local farming, while equally creating jobs including the 774 cooks now in gainful employment in Anambra State.

While the 2016 Budget of Change made provision for funding of the feeding programme in 18 states, a total of 17 States have concluded the designing of the School feeding models through state-level multi-sectorial capacity building workshops, based on FG’s stipulated requirements.

Those states will proceed in the planning and would soon get to the implementation stage.

Estimated figures from 15 of these states put the numbers of pupils to be feed at over 3.4 million.

Also the Federal Government has successfully conducted food safety and hygiene training for over 25,000 cooks in 9 states (out of the 17).

According to the 2016 budget, provision was made for the feeding programme in 18 states of the federation.

It is the plan of the Buhari administration to implement the feeding programme all across the country, where states meet the federal requirements for such engagement.

Under the school feeding programme, there are no pre-selections, but states/FCT have to meet the stipulated requirements.

While the 2016 Budget planned for 18 states, all 36 states and FCT are eligible to participate as budgetary provisions even in the new year are being considered.

Mimiko, Louis Odion and the Limits of Charlalism