The Executive Secretary of Delta State Scholarship Board, Peter Amromanoh and his accountant, Andrew Boji Nkwor are being prosecuted by EFCC on a 5-count charge of conspiracy and stealing. 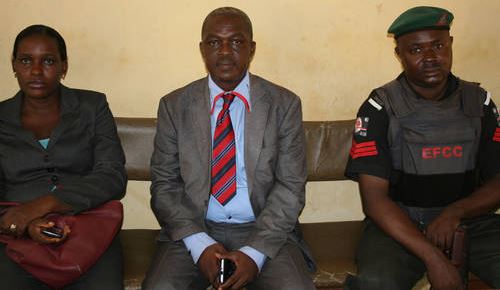 The trial of the Executive Secretary of Delta State Scholarship Board, Peter Amromanoh and his accountant, Andrew Boji Nkwor continued on Wednesday, February 3, 2016 with a prosecution witness telling Justice F. N. Azinge of the Delta State High Court sitting in Asaba, that the accused persons exceeded their approval limit.

The accused persons are being prosecuted by the EFCC on a five-count charge bordering on conspiracy and stealing.

Under cross-examination, Joy Ochonu-Idoko, an operative of the Economic and Financial Crimes Commission, EFCC, insisted that, withdrawals were made from the board’s account by the 2nd accused, Nkwor, in the name of the 1st accused, Amromanoh, and brought to the Delta State scholarship board office.

According to him, when the accused person, Nkwor was asked about what the withdrawals were meant for, he claimed it was monies for payment of contractors.

The witness also told the court that the board Secretary who is the first accused is the bursary approving authority.

Documents showing financial transactions from Fidelity and UBA bank accounts were tendered, and admitted as exhibits.

However, the defence counsel, Chief A. P. A. Ogiefere, in a bid to contradict the witness asked for a proof with instruments such as vouchers and cheques.

He also sought to tender a copy of a payment voucher for the purchase of a utility vehicle by the board, citing this as the standard procedure adopted by the board.

Odiase, however, opposed the tendering of the document on the ground that, it did not meet the proper certification for public documents for evidence as provided by Section 104 of the Evidence Act 2011.

The defence bowed to his argument and consequently withdrew it.

Thereafter, Justice Azinge adjourned to February 4, 2016 for continuation of cross examination of the witness.

At the resumed sitting today, Idoko insisted that the list provided to the board by the IT consultant enlisted by the board for online registration of students was different from the list the first accused presented to the bank for payment.

It will be recalled that, the EFCC operative had earlier testified that, there was discovery of a whooping number of 3,567 names as beneficiaries from the coffers of the Delta State scholarship board who were not genuine students.

The witness also read out to the court from Exhibit K (a correspondence from the Federal Polytechnic Offa), three names from the 3, 567 ghost beneficiaries of the Delta State scholarship bursary.

According her, “one Okaro Monday, the school says is an impostor not a bona fide student of the school, Obi Jerome Efe the school remarked that his programme of study electrical electronics HND1 is non-existent and another impostor, Odegbo O. Jacob.”

The defence subsequently asked if the witness was aware that the accused persons had returned some monies unclaimed by applicants to the board, listing the sums of N80million in 2009 and N172, 555.500 (one hundred and seventy two million, five hundred and fifty five thousand and five hundred naira) in 2010 and 2011 thereby saving the state money.

In response, the witness told the court that, only N80million was returned as at the time of investigation.

Another attempt by Ogiefere to tender in evidence a payment voucher and attached memos for the purchase of a utility vehicle by the board suffered the same fate like the one earlier sought to be tendered by him.

Wike’s Unnecessary, Narcissistic Public Holiday Aimed at Putting on the Toga of a Deity