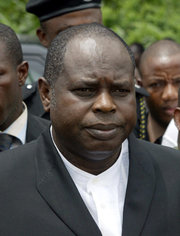 The UK High Commission did not send a request to President Muhammadu Buhari for the extradition of Chief Diepreye Solomon Peter Alamieyeseigha. The former Baylesa Governor was said to have suffered a cardiac arrest two weeks ago and gave up the ghost October 10, after having slipped into coma and was consequently placed on life support.

Pro-APC news media carried the news the previous week that the British Government had re-opened its case against Alamieyeseigha and extradition request had been made to President Buhari. Some of them, in announcing his death even went to the extent that he died because he was fearful of being extradited to the UK where he would have been jailed.

Rumour — another name for an unconfirmed story in circulation — comes in different forms and with different motives and could be dangerours. In the case of Alamieyeseigha, it was fatal.

Alamieyeseigha’s death, at a hospital, was announced by Bayelsa, the oil-rich Nigerian state that he governed from 1999 until he was impeached in 2005. The cause was given as complications of high blood pressure and diabetes.

Mr. Alamieyeseigha’s health problems resulted from his transfer from a hospital in Dubai, in the United Arab Emirates, to avoid being extradited to Britain, where he was wanted on money-laundering charges and for skipping bail, according to his successor, Gov. Seriake Dickson. He was also charged with money laundering by the United States.

There are insinuations therefore, that his death was not unconnected to the rumours of his possible extradition to the UK for an outstanding money-laundering case, which were swiftly denied by the UK High Commission in Nigeria.

The Chairman of the Presidential Advisory Committee on Corruption, Professor Itse Sagay, was quoted to have said that the President Buhari-led government is prepared to assent to the request of the British Government as the United Kingdom has every legal right to demand for the extradition of the former Bayelsa State Governor.

The British High Commission in Nigeria has however debunked as mere rumour, the news making the rounds in the media, that the former Governor of Bayelsa State, Chief Diepreye Solomon Peter Alamieyeseigha is wanted in the UK to answer question bordering on corruption charges.

A senior officer of the Commission, who spoke confidently and on anonymity, said the information is a rumour in its entirety, adding that the Crown Prosecution has not tabled any extradition request on Alamiesyeseigha, to the High Commission.

She however disclosed that there is no renewed move to reopen the case. “As you know, the immediate past High Commissioner, Sir Andrew Pocock, before he left Nigeria, had in an interview averred that the manner in which Alamieyeseigha escaped from UK, made him a wanted a person.

“But as you know and with the new government of President Muhammdadu Buhari, in place, the media is presenting it as if the UK has said that we need this man. There is no such thing as moves for his extradition or of anybody or organisation to recall his extradition to UK,” she said. “Like you know, the media find such issues interesting. They just jumped to and start publishing the way they like, without clarifications from the High Commission.”

In September 2005, Alamieyeseigha (then the Bayelsa State governor) was detained by the London Metropolitan Police on charges of money-laundering

Diepreye Alamieyeseigha, a former governor of a Nigerian state who gained notoriety for building extravagant public works and embezzling as much as $55 million in Oil Ministry revenue, spending it on luxuries and homes around the world, died on Saturday in Port Harcourt, Nigeria. He was 62.

Nonetheless, Mr. Dickson said Bayelsans “are proud of his life and the legacies he left behind.”

As governor, Mr. Alamieyeseigha (pronounced al-uh-mess-EE-ya) brought Nigeria’s notoriety as a source of global flimflam to a new nadir a decade ago.

Amassing a fortune in foreign bank accounts, he acquired houses in London, California and South Africa and an oil refinery in Ecuador, all while tapping public coffers to build an airport in his hometown and an Olympic-size stadium in the state capital, among other public projects.

The United States Justice Department won a forfeiture judgment against him in 2012 for money laundering and corruption.

Justice officials said he had accumulated millions of dollars’ worth of property and bank accounts around the world during his six years as governor, a period in which he was paid a total of $81,000 in salary and declared $248,000 in income from all sources.

After Mr. Alamieyeseigha was charged with money laundering in London in 2005, the police found that he had $3.2 million in cash and bank accounts and $15 million in real estate holdings there. Two months later he jumped bail — disguising himself as a woman by some accounts, although he denied that.

“Given that Alamieyeseigha had been accused of robbing blind his own people, it seems fair to assume that he would have tried to keep his return as low-key as possible,” Mark Hollingsworth and Von Kemedi wrote in the book “Against the Odds: President Goodluck Jonathan, the Rise of Nigeria as Africa’s Economic Superpower and the Threat of Boko Haram,” published this year. But they added, “Far from it.”

Addressing his cheering supporters back home, they wrote, Mr. Alamieyeseigha said: “ ‘I cannot tell you how I was brought here. It is a mystery. All the glory goes to God. Today I am back at my desk, forever committed to serve the people of Bayelsa and Nigeria. I thank the almighty God for his protection.’ ”

The state legislature impeached him in December 2005. While he insisted that the accusations of corruption were politically motivated, in 2007 he pleaded guilty to failing to declare his assets, and front companies he controlled were convicted of money laundering.

He was sentenced to two years in prison but, credited with time served, he was imprisoned for just one day. He was pardoned in 2013 by President Goodluck Jonathan, who had been his deputy and had succeeded him as governor. (Mr. Jonathan was defeated in a re-election bid in May.)

The United States Embassy said it was “deeply disappointed” by the pardon. It was granted in a country with a reputation for a kleptocratic culture, which has manifested itself in everything from government corruption to millions of emails sent worldwide by scam artists posing as Nigerian bankers seeking the help of unsuspecting people in transferring cash out of the country.

Diepreye Solomon Peter Alamieyeseigha was born on Nov. 16, 1952, in Amassoma, a town in the Niger Delta. He trained as a cadet in the Nigerian Defense Academy and joined the Air Force, serving until 1992.

After working as an executive for a fertilizer company, he was elected the first civilian governor of Bayelsa as a member of the People’s Democratic Party in 1999. He was re-elected four years later.

Watch the Regrets of British mother and children who escaped Isis

Sec Kerry highlights US leadership in speech at Indiana University