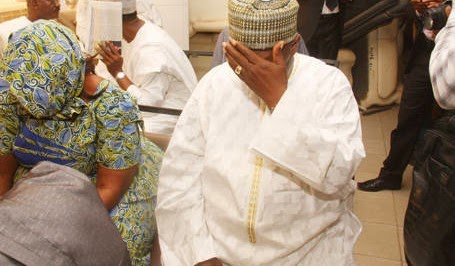 The trial of Ibrahim Ahmed Mazangari, Muhammed Sani Sulaiman, Hajia Fatima Mazangari and Saleh Yerima Tsojon, who allegedly ran a syndicate that defrauded the Federal Government to the tune of N1.2 billion in a pension scam, continued on Monday, November 2, 2015 with the prosecution witness giving insight into how they carried out the fraud.

Led in evidence by prosecuting counsel, O. A. Atolagbe, the witness, Roukayya Ibrahim, an investigator with the EFCC and member of the Pension Fraud team, told the court that the fraud was uncovered in 2010 while the Head of Service pension board was being probed.

“We received intelligence of the syndicate operating in Kaduna being led by Hajia Fatima Mazangari, and we immediately commenced investigations,” she said.

The accused persons, according to her, used two companies – Xangee Technologies Limited and Century Construction Company Limited, to perpetrate the fraud.

She told the court that Xangee Technologies Limited, which is owned by Mazangari was offered a biometric contract by a former HoS, Steve Oronsaye, to regularize names of pensioners on the pensions’ payroll, but smuggled in names of fake pensioners (including his own name), and collected unearned pension.

“Investigations revealed that Xangee, an IT firm was paid about N153 million for the biometric contract, but we found out that the process of awarding the contract did not follow due process as there was no contract bidding, yet payment was made,” she said.

The second accused person, according to Roukayya, used three variants of his name to open three different pension accounts, to which a total of about N24 million of pension payments at different times were paid; the money was afterwards withdrawn and handed over to Fatima.

She added: “During investigations, it was also discovered that Saleh Yerima Tsojon who at the time was serving his mandatory NYSC service in Calabar, was receiving pension payment which amounted to about N23 million.”

The four accused persons are being prosecuted by the EFCC, on a 29-count charge bordering on conspiracy, and collecting by false pretence.

They are alleged to have obtained N1.2 billion from the FG purporting same to be monthly pension payable to M. S. Suleiman, Saleh Yerima Tsojon, Isah U. Adamu, Daniel Mikano, and Abdullahi Garba Musa who were falsely held out as pensioners, by inserting their names in the pensioners’ payroll.