How Pope Francis Inspires The World 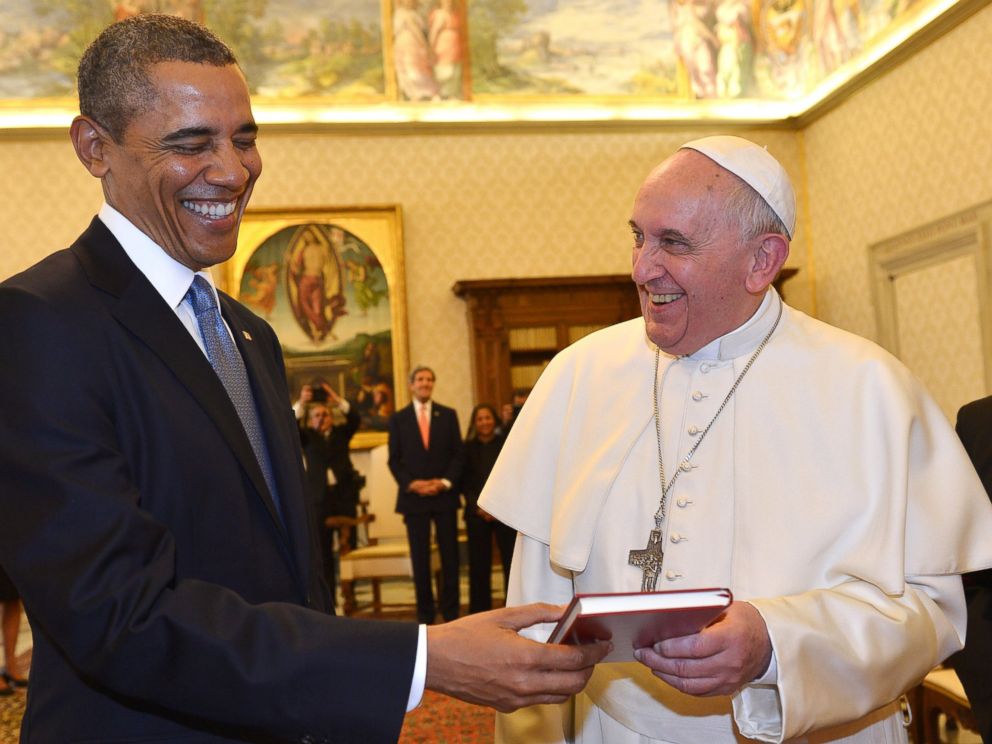 President Barack Obama has in the last seven years not exactly behaved like the World’s strongest political leader as is traditional with every privileged holder of the high office of the President of the United States of America.

Being the first ever black American to assume that rare position, Obama’s lack of demonstrable panache militarily has won him a lot of critics who view his foreign policy direction as weak . In conservative circles in the United States, he is seen as being too reconciliatory towards entrenched traditional adversaries of the United States such as Iran and to some extent Russia. The Obama’s Presidency has seen a lot of bickering and buck passing between the United States and Putin led Russia on who is stoking the fire of anarchy around Ukraine which has in the last couple of years being in civil war.

In the current campaign train by the Republicans and Democrats preparatory to next year’s presidential election, President Obama has become the Central focus particularly because most Republican aspirants to the office of President think he is weak and directionless. A certain supporter of one of the most controversial aspirants to the US Presidency under the Republican platforms was even quoted in the media as telling Donald Trump that President Obama is a Moslem.  Obama has repeatedly confessed his Christian faith anyway.

Donald Trump who is one of the frontline Republicans does not have any salutary phrase to describe President Obama whom he regards as  a very weak political leader. Whereas, much of the World search for the most suitable strong political leader, there is no doubt that the global leader of the Catholics has distinguished himself as the indisputable moral leader and voice of the disadvantaged citizenry of the World.

Pope Francis has remarkably spoken out in defence of the defenceless. He it was, who appealed to the consciences of World political leaders to do more to rescue the dying boat people of Africa who are fleeing civil wars and mass poverty into the civilized European nations through the very dangerous Mediterranean Seas. Pope Francis has also shown remarkable leadership in speaking out in favour of the hundreds of thousands of Syrian and Iraqi refugees flooding into Eastern and Western Europe through Turkey; Greece and Hungary.

At a time conspiracy theorists and counter-terrorism experts were warning Europe to be wary of welcoming the fleeing Syrians based on the allegation that the Islamic terrorists of Isis have plotted to pour in their foot soldiers into European soils who would mingle with genuine refugees so as to wreck harm to those calm and peaceful European nations, Pope Francis used his moral authority and persuaded Europeans to accommodate genuine refugees who are indeed fleeing from the genocides going on in their homelands by both the terrorists and armed supporters of the embattled  President of Syria Mr. Basher al-Assad regime.  Recall that the British Broadcasting Corporation (BBC), one of Europe’s most respected broadcaster has reported that so far, over 200,000 Syrian civilians have been massacred in the few years of anti-Assad rebellions.

But while World’s political leaders such as President Obama of the United States, President Vladimir Putin of Russia and Prime Minister David Cameroun of Britain are yet to come to terms with how best to stop the war in Syria, the Holy Father has consistently displayed unprecedented quality of moral leadership in rallying the rest of the World to do more to assist the suffering masses of Syria and Iraq.

Even without having his authoritative fingers on any nuclear armaments nor is he the commander in chief of any formidably weaponised Armed Forces unlike what leaders of the rest of the five permanent United Nations Security Council members have, Pope Francs has done much more to inspire the World’s community to show empathy towards the victims of the atrocities in Syria. Characteristically, Pope Francis called for hospitality in Europe for the fleeing refugees from Syria.

His words: “May every parish, every religious community, every monastery, every sanctuary in Europe host a family,” the pope told a crowd in St. Peter’s Square after reciting the traditional noon Angelus prayer.

From available stayistical records, there are approximately 120,000 parishes in Europe, according to the Center for Applied Research in the Apostolate at Georgetown University. The pope added that the Vatican itself would receive two families in the next few days.

The researchers recalled that this charismatic Papacy  has made migration one of the major social causes of his pontificate. Only a few months after his election in 2013, he visited the southern Mediterranean island of Lampedusa, a major entry point for undocumented migrants to Europe, where he denounced rich nations’ indifference to the thousands who had died trying to cross the sea from North Africa. Had World political listened to his wise counsel and rose to the occasion to deploy all available manpower and resources to help the people of Syria and Iraq resolve their internal contradictions and conflicts and build and run open, transparent, accountable and democratic administrations perhaps the impacts of the devastating consequences of the terrorism activities of armed members of the Islamic State of Iraq and Syria would have by now been conquered.

Pope Francis’ latest appeal to Catholics to set an example of Christian mercy came as Germany and Austria received, via Hungary, one of the largest waves of displaced people since World War II: thousands of migrants, many of them fleeing Syria and other war-torn countries according to narratives from international news sources.

Some 13,000 migrants had crossed Hungary’s border with Austria by Sunday afternoon. Most of them were already in Germany, which was working to distribute them across the country, according to the reports from foreign agencies.”

This week, the Holy Father is visiting two countries with hitherto parallel political ideologies – Cuba and the United States of America.  Earlier in the year, the Pope intervened to smoothen the long standing frosty relationship between those two countries and this diplomatic feat led to normalization of relationship between the duo after nearly half a century as enemies.

Pope Francis like the great Saint Francis of Asisi, has used his ongoing Cuban trip to mentor the youth on the imperative of education as the best asset that any nation can give to her youth.

The official media of the Vatican said the U.S. embargo on Cuba, education, care of the environment, war and peace were the themes of the different meetings the pope is holding with stakeholders in Cuba and especially in media fora with youth of these two nations.

Preparatory to his current trip, the Vatican staged a satellite television conference with youth from Havana and New York.

News report has it that Ten youth participated in the Sept. 17 event, five of whom were students from New York, and five students from different schools in the Cuban capital of Havana.

In the question and answer session, youth from both countries spoke with each other and the Pope, asking him questions such as how to care for the environment, how to be a good leader, and the right of children to play.

Francis also told the youth he will do what he can to build bridges between the two countries, but stressed that policies can take a while, and friendships are the first thing they should foster. In the current Cuban trip the Pope has shown unprecedented calmness,friendship and openness in solidarity with the poorest of the poor.

The Media satellite debate aforementioned was hosted by Scholas Occurrentes, the television conference was organized in anticipation of Pope Francis’  Sept. 19-27 visit to  Cuba and the United States.

It was transmitted via satellite and held in collaboration with The United Nations Children’s Fund (UNICEF). Filming was done by CNN in New York, and by Vatican Radio and the Vatican Television Center on the part of the Pope. Yours faithfully remained glued to my TV set in my little home in Abuja where I and my uncompromisingly staunch catholic family watched the proceedings and like millions of audiences from around the globe who watched this programme and who are monitoring the Pope’s current apostolic visitations to Cuba and USA I must confessed that I’m thrilled and inspired to do good to humanity in all my undertakings and activities in private and public spaces. Such is the inspirational influence that the exemplary attitudes of Pope Francis infuses on millions of observers some of whom are not even believers in God.

The conference aforementioned was broadcast on CNN the evening of Sept. 18.

From this encounter we saw how Pope Francis simplified the articles encompassed in the Universal Declaration of Human Rights with specific emphasis on child rights and the universal right to education.

Speaking about the denial of the right to education faced by Children in war zones the Pope is not unkind full of the fact that almost 1 million Nigerian Children have been driven out of school in much of North East of Nigeria due to the activities of blood thirsty terrorists of Boko Haram. Several school Children have been bombed to their death in Nigeria and over three hundred school girls from Chinox in Borno State who were kidnapped by Boko Haram nearly a year and half are still held in captivity. Pope Francis has extensively advocated their unconditional release.

Still speaking on the inestimable value of education  Pope Francis told Cuban and American youths thus:   “It’s a challenge. It’s a challenge that we have to face. And we have to start with ourselves. Educating among ourselves. The service of educating ourselves. Don’t wait until the governments reach an agreement. Many years will pass, because it’s difficult. The educational pact is broken. To educate among ourselves. How many children your age, how many boys and girls go on weekends, holidays, to educate, to give classes to others, to teach them. Education is a human right. A people that isn’t educated, due to war or all the reasons there are for not being able to have an education, is a people that decays, decays, decays, and can even fall to the level of instincts. So you, if you want to do something, organize yourselves to help governments, the States, to educate children that don’t have access to the right of education. A child has the right to play. And part of education is to teach children how to play, because one learns how to be social in games, one learns the joy of life. Committing oneself to the education of children. Education is a human right.”

A good lesson from these series of high profile events by the leader of Catholics Worldwide is that there is a yawning leadership gap in the World which calls for urgency, so humanity can pursue a common goal of building a peaceful World whereby civil wars would be reduced to its bearest minimum and the impacts of climate change to the environment collectively handled. Will China, Russia, USA and Europe and of course Africa embrace this monumental challenge with an openness that calls for global constructive dialogues?  Only time can tell!