How to achieve success in health care delivery- Peter Obi 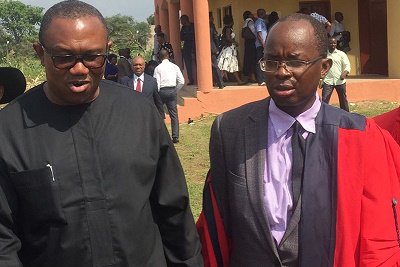 The former Gov. of Anambra State, Mr. Peter Obi said that one of the problems among Nigerian leaders was lack of planning and right prioritizing especially in health sector.

He said this yesterday while delivering the key note address at the induction of newly graduated medical doctors at the University of Nigeria, College of Medicine Campus, Ituku-Ozalla, Enugu.

Obi, who reminded the new graduates that their future is in their hands, encouraged them to go out to the world with the resolve to help in changing it for better.

Recalling his days as the Governor of Anambra State, Obi said that his successes in many sectors were due to his collaboration with development partners, organizations and the Church.

He said it was also necessary to prune down the cost of governance, which he described as “too high”, in Nigeria.

Using the Church an example, he said Anambra was able to record first in external examinations because of the return of school to the Church.

This was followed up by massive funding towards the rehabilitation of returned schools.

In health, he said before he became Governor, not one medical/health institution was accredited in the State.

However, working closely with the Church, he was able to secure accreditation of 11 health institutions, including two hospitals.

He revealed that he was working on the accreditation of the third hospital – Ekwulobia General Hospital, before he handed over.

Speaking further, Obi also explained his pains at discovering that the Chukwuemeka Odumegwu -Ojukwu University admitted students who could not graduate.

This is due to absence of a teaching hospital and how under two years he built one that was acclaimed as of the best in the country.

Mr. Obi thanked the staff and students of the University of Nigeria.

He challenged the new students to keep the flag of the university flying by seeking to be the best wherever they found themselves.