No one is backing or shielding those that committed crimes against the nation, but it should be made clear that Dasuki, Kanu, or any other accused person remain innocent until proven otherwise by a court of law. – YARPTI

A human rights group Youths for Human Rights Protection and Transparency Initiative (YARPTI) has frowned at the disrespect of court orders by the Buhari led government of Nigeria.

The group  condemned the situation were several  courts have granted Mr. Dasuki [right] and Mr Nnamdi Kanu bail and  after fulfilling the conditions for their  bail the DSS refused to allow them  go .

In a statement jointly signed by its National Coordinator, Kenneth Uwadi  and  National Media Affairs Director , Veronica Ekpo , the group viewed the two development  as “exhibition of dictatorial tendencies and an attempt to return Nigeria to the dark days of military jackboot’’.

According to the statement, ‘no one is backing or shielding those that committed crimes against the nation, but it should be made clear that  Dasuki, Kanu, or any other accused person remain innocent until proven otherwise by a court of  law.

“The way Buhari is going by presuming the accused people to be guilty are unconstitutional.”

Col Sambo Dasuki met his bail conditions and was walking out of Kuje Prison but was immediately rearrested by the DSS and whisked away. 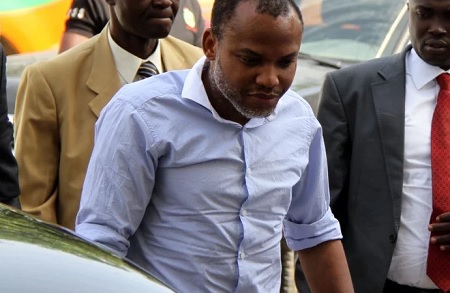 Three separate courts have so far granted Mr. Dasuki bail. But even after fulfilling the conditions for his bail, DSS has refused to allow him go home.

The same thing happened to former NIMASA boss as well as Nnamdi Kanu where court orders were disobeyed.

In the case of Nnamdi Kanu [left], the DSS flouted and gravely disobeyed four express and consequential orders of the Wuse Zone 2 Magistrate Court and the Federal High Court, Abuja Division bordering on his constitutional rights to personal liberty, association, assembly, dignity of human person, life and expression.

Sadly, the President has confirmed his dictatorial tendencies by saying in a national media chat that people like Sambo Dasuki and Nnamdi Kanu do not deserve bail because of the weight of atrocities they have committed.

Buhari is undermining the courts and overthrowing the constitution of Nigeria.

YARPTI said “the government had the opportunity to present their evidences and argument against bail for the two and they did.

“The court considered all the evidences and all the arguments and decided to grant bail. Why will the President say they do not deserve bail?

“The President took an oath to uphold the constitution which is supreme to all other laws or personal opinion. We are in a democracy and democracy is all about the rule of Law.

“Disobedience to court orders by those who should protect and ensure its compliance slides the Nation to anarchy.

“You don’t act illegally, and as an oppressor of the people and expect the people not to resist such illegality.

“Whatever the sins of Dasuki and Kanu, let the court alone determine,” YARPTI concluded.

Great 2016 expectations, we will be alive to our responsibilities – NLC