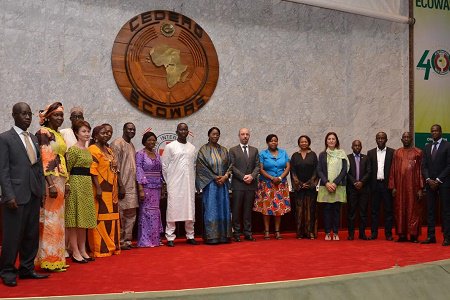 ECOWAS and the International Committee of the Red Cross (ICRC) have presented their Report on the implementation of the International Humanitarian Law (IHL) to Ambassadors from ECOWAS Member States as well as ECOWAS donor countries.

At the briefing of ECOWAS Ambassadors and donor countries which held on the 3rd of March 2017 in Abuja, an update of the activities of the ECOWAS Commission and the ICRC on the promotion of IHL implementation at both regional and national levels was given while a platform was developed for the continued exchanges with Ambassadors from ECOWAS Member States and the diplomatic community on humanitarian concerns and challenges in the region.

Opening the meeting, the first to be convened jointly by both parties on the issue, the ECOWAS Commissioner, Social Affairs and Gender Dr. Fatimata Dia Sow restated the commitment of ECOWAS to a holistic approach to the engendering of best humanitarian practices in West Africa.

Calling for the institution of an annual review of implementation measures undertaken by ECOWAS Member States, the Commissioner urged the ambassadors to make certain the fair disposition of their governments towards the effective implementation of the IHL.

Recognising the IHL Plan of Action as a priority measure, she endorsed the establishment of National Committees on IHL as well as the designation of National Focal Points for reporting progress in ensuring compliance with IHL amongst other measures.

The Head of Delegation of the ICRC in Nigeria Mr. Eloi Fillion spoke of multidisciplinary and comprehensive approach to the issues raised in the Report since this also provides both an important reference tool for measuring the status of ratification, domestication and implementation of IHL treaties by ECOWAS Member States, as well as valuable information regarding the ECOWAS and ICRC activities in supporting implementation of the IHL at national and regional levels.

The meeting saw the presentation on the promotion of IHL implementation in West Africa by the Director, ECOWAS Directorate of Humanitarian and Social Affairs Mrs. Florence Iheme.

It demonstrated among others, that ratification is only a first step in the entire process while domestication by Member States and sustained implementation have to follow in order for attainment of the desired results.

There were also other presentations bordering on an overview of the report on implementing IHL as well as on ICRC operations in West Africa given by the multilateral liaison Officer, ICRC Nigeria Ms Patience Nanklin Yawus and the Communications Coordinator, ICRC Nigeria Mrs. Aleksandra Matijevic Mosimann

The cornerstone of the ECOWAS-ICRC collaboration has been the annual review meeting on the implementation of the IHL based on the Memorandum of Understanding (MoU) signed in 2001.

Participants at the meeting included members of the Diplomatic Corps and International Partners working in the field of IHL.