A female lawyer, Yewande Oyediran, who was accused of killing her husband, Lowo and was sentenced to seven years’ imprisonment by Justice Muntar Abimbola of the Oyo State High Court, sitting in Ibadan, Oyo State, for manslaughter has been released the by the former governor of the State, Isiaka Abiola Ajimobi after serving barely three year and was immediately flown abroad to avoid public eyes, ElombahNews has been informed.

According to information gathered by this medium, Yewande killed her husband, used connection to almost beat the charge, got only 7 years, and then used connection to get the then outgoing Governor Ajimobi to grant her clemency before leaving office.

The former worker of the Department of Public Prosecutions in the Oyo State Ministry of Justice was accused of killing her husband with a knife after a disagreement on February 2, 2016, at their residence in the Akobo area of Ibadan.

The disagreement was said to have arisen after Yewande accused her France-based husband, Lowo, of infidelity.

She was subsequently arrested and arraigned, but she pleaded not guilty to the murder charge proffered against her.

According to Justice Abimbola, her seven year jail sentence was to start running from the day of her arrest.

In justifying the sentence, the court said the convict was charged on a murder count by the prosecution and that although evidence pointed to her as the killer of her husband, witnesses presented by the defence counsel failed to establish the intent behind the killing.

The court held that going by the relationship between Yewande and Lowo as husband and wife, the killing was done without intent.

Her family, it was gathered, is well connected, and upon release she was out of the country.

A source said that she presumably knows the system inside out as she was a prosecutor at the Oyo state Ministry of Justice, hence, barely spent three years in jail for this conviction.

Another source confirmed that she killed her husband simply because he was planning to go visit his child in France which she didn’t know about from the beginning. 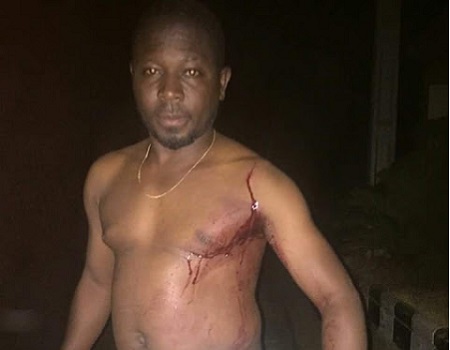 She stabbed him with scissors a day before [see photo right] and he went back to the house after treating himself only to be stabbed with a knife after.

The source argued that she coincidentally being a former prosecutor, was prosecuted by one of her former colleagues.

According to him, even the prosecutor sounded like her defence lawyer.

According to the source, “the prosecutor asked the judge to send Yewande to a correctional facility where she will be reformed instead of a prison,

“But the prosecution failed to carry out a forensic test on the knife to ascertain if it was the one that was tebndered that was actually used in the stabbing or not.”

The private prosecutor engaged by the state, Mr. Akinyele Sanyaolu said after the judgement was pronounced that he was satisfied with the sentence.

“I am satisfied with the sentence, but I don’t know whether the state will be happy or not.

“The court has already done a great job.

“The court was able to establish between murder and manslaughter in matrimonial matters, and that was why it came to the issue of intention, which was why the court didn’t sentence the accused to death because they were married and the law presumed that she did not have the intention to kill her husband,” he added.

The court observed that from the evidence before it, the couple, who had no child together since they got married in 2014, constantly engaged in domestic violence.

The judge explained that the crime was not premeditated or intentional and that it was as a result of marital disagreement between a husband and his wife, adding that it was a case of manslaughter and not murder, which could have attracted death penalty.

Yewande’s lead counsel, Leye Adepoju, pleaded for lenient judgement after the judge established that the killing was not premeditated.

Adepoju argued that a long sentence would ruin the accused’s life, having suffered greatly as a result of what happened.

He also asked the judge to send Yewande to a correctional facility where she would be reformed, instead of a prison.

“Having considered the plea of leniency from the defence counsel and the plea of allocatus with the series of evidence before me, I hereby sentence the defendant to seven years’ imprisonment starting from the time of her arrest.”

Missing vehicles: Oyo Government has nothing to hide