I never made derogatory comments against IPOB —Osinbajo

This was contained in a flyer posted on social media by the Vice President’s media team titled “Fake news alert: the Vice President never made any derogatory comments against IPOB and the Fulani herdsmen clashes“.

Vice President Osinbajo was quoted as saying about IPOB:

“In all our previous engagements with Northern and South-Eastern leaders, we all came to the consensus that Nigeria is stronger and better together.”

He was also quoted as saying about Fulani herdsmen killings:

“We must condemn killings of any kind. It doesn’t matter whether these killings are by herdsmen killing villagers, or whether it is villagers who in one way or the other have killed others, including herdsmen. I think it is important that we condemn these killings. There is no reason at all why anyone who commits these offences will escape.”

Reacting to the comments, Osinbajo’s team  said that he has never made any statement threatening that IPOB must be “crushed by fire by thunder.”

“It is not even in the character of the VP to make such statement or the manner in which it was said. The alleged statement is all lies.

“The Vice President has always called on all Nigerians to unite and build this country.

It, therefore, urged Nigerians to ignore the fake news mongers and lie merchants.

See below the statements credited to the Vice President on these issues and his response: 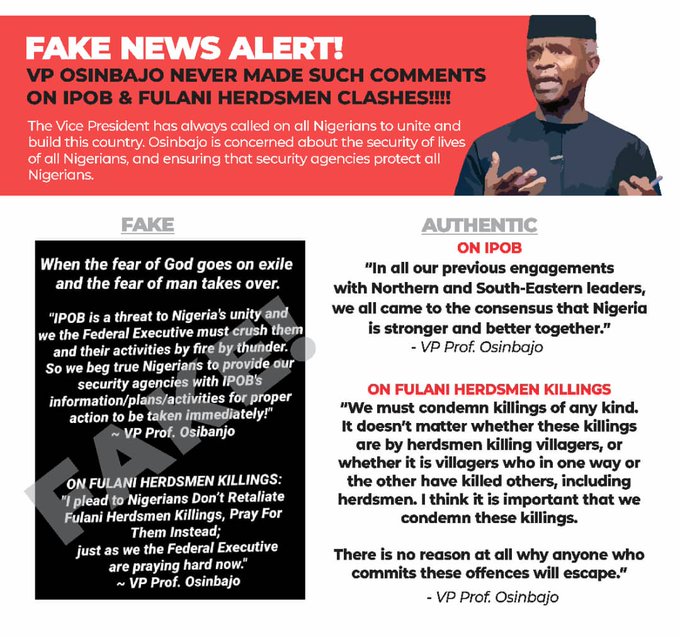