I Shall Pick My Deputy As Successor, According To God’s Instruction – Ayo Fayose 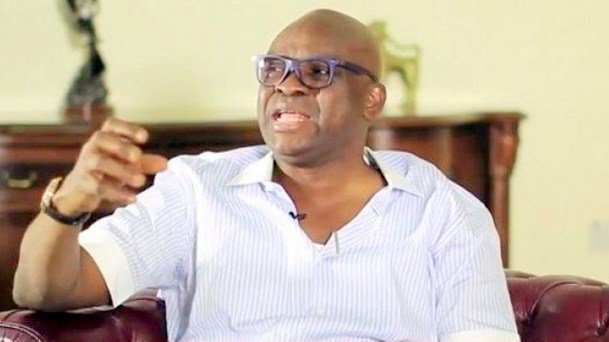 Ayo Fayose, Ekiti State governor,  at a PDP rally on Monday in Ado Ekiti, declared that God directed him to support his Deputy, Kolapo Olusola-Eleka, to succeed him.

“Olusola never said he wanted to be deputy governor, but God instructed me to pick him. I said we will go together after our tenure, but God said I should allow him to stay; that what I said was my own opinion,” Fayose told the huge crowd.

It should be noted that a former minister of state for works Dayo Adeyeye, a serving senator Biodun Olujimi, and Nigeria’s former envoy in Canada Dare Bejide, had indicated interest in the PDP’s ticket for the July 14 governorship election.

In contrast to the governors wish, the trio, along with a former Fayose aide and justice commissioner, Owoseni Ajayi, had jointly rejected the adoption of Olusola as the PDP’s sole candidate. Which they described as “pedestrian and undemocratic”.

But Fayose, who spoke at the rally held at Okesa area, said that he was not rattled by the negative utterances hurled at him by the anti-Olusola aspirants.

“The PDP has taken a position which we think is in the best interest of the state; we shall not be distracted by those opposed to this step,” he said.

He expressed confidence that the PDP will win the July 14 election “by God’s grace”.

Fayose said that the large turn out of people for the rally was a testimony of PDP’s popularity in Ekiti, and warned those thinking of rigging the election to perish that thought as the people would resist that.

He said that his administration had achieved a lot in the areas of infrastructure.

“We have improved on infrastructural development. We built a flyover at Oja Oba market and also built a new governor’s office. We have executed many projects,” he said.