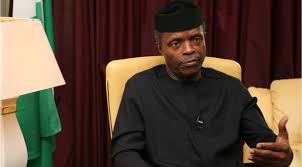 Acting President Yemi Osinbajo on Thursday at the Presidential Villa, Abuja, presided over a meeting of heads of security and anti-corruption agencies and some cabinet ministers.

The News Agency of Nigeria (NAN) reports that the Minister of Information and Culture, Alhaji Lai Mohammed and the Attorney General of the Federation and Minister of Justice, Abubakar Malami attended the meeting.

The meeting, which lasted for over two hours, was also attended by Inspector-General of Police, Ibrahim Idris and the Chairman of the Independent Corrupt Practices and Other Related Offences Commission (ICPC),Ekpo Nta.

Others at the meeting included the Director-General of the Department of State Services (DSS), Lawal Daura and the Chairman of the Economic and Financial Crime Commission (EFCC), Ibrahim Magu.

Answering questions from State House correspondents after the closed door meeting, the EFCC boss, who declined to speak on the outcome of the meeting, urged all Nigerians to join the ongoing fight against corruption.

He identified corruption as one of the causal factors responsible for the current recession in the country.

“I’m asking all Nigerians to join in the fight against corruption; adults, children, men, women and including you journalists.

“Corruption is the greatest menace we are facing in the country. Corruption is responsible for the recession we are witnessing today.

“So, all Nigerians must join in the fight against corruption,’’ he said.

It was also noted that Acting President Osinbajo had earlier met with the leadership of the Nigeria Labour Congress (NLC)and Trade Union Congress (TUC) and commended them for joining the ongoing campaign against corruption in the country.