Ikpeazu and the PDP does not care about Aba – Angry Member 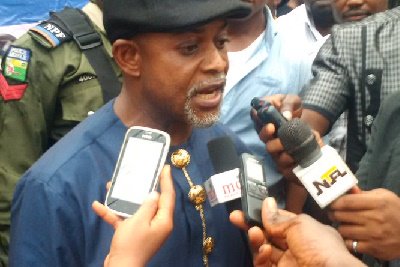 A federal lawmaker from Abia state has blasted the Government of Abia state for their insincerity to the people of Aba and not doing enough to stop the rampaging herdsmen who have invaded several parts of the state.

This feature story titled “Why Hon Prestige Ossy cares about Aba?” is about a simple man who truly  cares about the plight of his people amidst the threat from the state ruling elite.

The ancient city of Aba has for so many decades suffered abandonment by the political elites who have led Abia state at different periods, but only the people of Aba can answer the question “Who cares about Aba?”

While most politicians only remember Aba during periods of electioneering simply for the voting power of the population after which they return to their political trenches and continue their business as usual approach which has left the industrial city of the South-east terribly underdeveloped for several years.

Aba as a city has often been in the news for the wrong reasons, but the story of Hon. Prestige Ossy member representing Aba North/ Aba South Federal Constituency of Abia state could be best described as service to humanity going by his numerous efforts towards improving the living conditions of his constituents.

As a legislator who received the backing of his people for a second term in the House of Federal Representatives, his commitment to serve the people of Aba cannot be overemphasized as political watchers will recall that Hon. Prestige was recognized to have sponsored the highest number of bills and motion in the 7th National Assembly, this is a feat he seems poised to sustain in the 8th Assembly going by the number of motions raised, bills sponsored and of course constituency projects carried out by him.

A man who is known to follow through diligently with anything he sets out to do made several promises to the people of Aba while campaigning and in less than 2 years has fulfilled most of them which include the provision of transformers to increase the distribution of electricity to members of his constituency whose means of livelihood as artisans and manufacturers require stable electricity.

He will also as a matter of fact soon begin a new chapter of projects that will continue to transform the lives of his constituents.

It is also on record that several students have benefitted from the scholarship project initiated by Hon. Prestige which also includes students at the undergraduate and post graduate level.

He has also organized several town hall meetings aimed at having direct interface with members of his constituents and this has afforded him the opportunity of having firsthand view of their everyday challenges.

One of his proposed new project include a partnership with the Chinese embassy to set up a state of the art ICT Centre in Aba where the Chinese will be training hundreds of youths in the art of becoming ICT proficient to engender self-reliance and productivity amongst them.

The people of Aba North/Aba South have also enjoyed the attention of the federal government through the efforts of Hon. Prestige when he recently invited the Secretary to the Government of the Federation and other federal lawmakers to Aba to witness firsthand the impact of erosion caused by natural disaster and the urgent need to deploy the federal government ecological fund towards the rescue of affected communities in Aba, as well as the need to increase security efforts to curb the rising menace of insecurity in the state.

As a member of APGA he was vehemently attacked by the political elite from the ruling party PDP in the state for carrying out some of these interventions using his political network to the benefit of the people of Aba, he insists that he will not be cowed to give up on his quest to liberate the people of Aba from the shackles of political correctness that have kept them perennially underdeveloped.

He however lashed out at his critics and their co-travelers who have since monitored several abandoned of projects both belonging to the state and federal government in Aba for decades without doing anything.

He sees it as playing to the gallery using politics as a means to continuously keep the people divided along political lines when what the people of Aba needs is infrastructural development.

He has also recently sponsored several bills and motions which are being considered by the House of Reps. One of which includes the motion on the need to curb the spate of kidnapping, armed robberies and killings in Aba, Abia state.

Another pertinent motion passed by him also is the motions on the need for the federal government to encourage the manufacturing of military and paramilitary wears locally to help the economy and save the naira amidst the current economic recession the country is facing.

It was no surprise that shortly after that motion was raised the Nigerian military immediately requested for the production of 30,000 military boots from indigenous manufacturers from Aba as a way of promoting the made in Aba which the likes of Hon. Prestige has been advocating for in recent years.

In preparation to this Hon. Prestige held a town hall meeting with the Aba Leather and Allied manufacturers on the way forward to enhance their products so as to ensure that the quality of their products can sufficiently match or even surpass those outsourced from outside the country.

Hon. Prestige Ossy has been known to be a man who cares for the people of Aba even long before joining the political terrain.

His antecedent in business has seen him employ hundreds of youths across the metropolis and this has spurred him on to use his political platform credibly well in favour of his constituents.

As a public figure he has not relented in speaking the truth no matter whose ox is gored especially when it involves the less privileged in society.

This was one of the things that led him to condemn the recent attacks on farmers in Abia state and other south-eastern states, where he described the state governors as “lily livered” for failing to enact laws that will protect their people from avoidable killings and destruction of their properties by these marauding Fulani herdsmen.

According to him, “it’s a pity that a lot of people see politics as a means of enriching themselves; it’s not for me, because I am here to serve.”

He is a man known to see politics as a means of contributing ones quota in serving the people rather than benefiting himself. Hon. Prestige Ossy is truly the man who cares about Aba.

Elections should enrich and not dehumanize Ogoni people