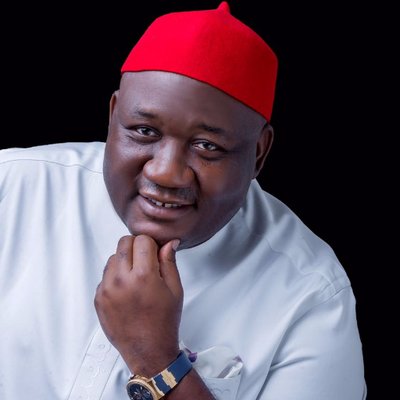 The senator for Imo north senatorial district, Distinguished Senator Benjamin Uwajumogu, has faulted the recent press conference conducted by one of his opponent in the concluded Imo north rerun senatorial election, Chief Athan Achonu, where the latter tried to take advantage of some media houses to insult, ridicule, misrepresent and tarnish the image of the Judiciary for doing nothing wrong but leave up to its responsibility of dispensing unbiased and fair justice to all Nigerians.

This is even as he said that the press conference was premeditated to malign, blackmail, intimidate and coerce the newly constituted panel for Imo north election petition matter to his dictates, as well as, do a hatchet job of creating a confidence crisis situation between the newly constituted tribunal Judges and the public, since he was not able to influence the posting of the judges this time around.

He said the unguarded statements and accusations that are coming from Chief Achonu against the Nigerian Judiciary, including his various deceitful ploys designed to disrupt the dispensation of justice in the Imo north election petition matter, were pointers to Achonu’s level of desperation and an indication that the ongoing fight against graft in the country’s judiciary has started yielding positive results.

The senator who made this known to journalists while reacting to the latest press conference of Chief Achonu, through his media assistant, Emeka Ahaneku said, ‘’No enlightened Nigerian will believe Achonu’s unfounded stories or take his press conference serious based on his antecedents, as he has shown over time to be very desperate, deceitful and therefore, unreliable especially when it comes to matters concerning the Okigwe senate elections’’.

Ahaneku, in a statement added that, “Chief Achonu in a dishonest and misleading manner made several unsubstantiated claims concerning the reasons for the disbandment and reconstitution of the Imo north election petition tribunal. He also made all sorts of assertions to the point that he erroneously accused  the judiciary of collaboration with the Imo north senator and his political party, the All Progressive Congress (APC), during his press conference’’.

According to him, “Achonu’s decision to kick against the reconstitution of the disbanded panel days after its reconstitution  has vindicated the earlier suspicion that he influenced the inclusion of Justice Oyedeji Saka Falola as a member of the first and second tribunal for the Imo north National Assembly  election petition tribunal’’.

He said: ‘’The Imo north senator wishes to assure the public, especially the people of Imo north senatorial district that they should not be bothered with the  latest unwholesome activities and several unguided statements coming from Chief Achonu. This is because the facts on ground speak for themselves.

He enumerated reasons why the tribunal was disbanded to include :

‘’That, upon his deployment as a member of the National Assembly Election Petition Tribunal in 2015, Justice Oyedeji Saka Falola, in a suspicious move, unilaterally ordered that the cases involving the Imo north senatorial district be transferred to his panel, where almost all the prayers sought for by the APC and other political parties were controversially struck out for lack of merit in favour of the People’s Democratic Party (PDP)’’.

“That it was also alleged that Justice Saka Falola who was returned for the second time as a member of the Imo north election petition tribunal, after his controversial outing in 2015, has a direct and strong link with the People’s Democratic Party, PDP, having been a staunch Chieftain and a presiding officer of the party before he became a judge’’.

’’that with the level of rejection, revelations, protest letters by different groups and weighty allegations of judicial corruption and bias that greeted the second nomination of Justice Saka Falola as a member of the Tribunal for Imo north election petition, the people of the senatorial district and the counsel for the candidate of the All Progressive Congress (APC), naturally lost confidence in the ability of his Panel, to ensure that justice is indeed done on the Imo north election petition matter’’.

‘’That the second coming of Justice Saka Falola elicited doubts in the minds of the people of Imo north senatorial district, who are still shocked at the controversial rulings he spearheaded against the APC candidate and Accord Party who were only able to get justice when the Court of Appeal intervened by upholding and transferring the matter between the Accord party VS the People’s Democratic PDP (PDP) to another panel’’.

‘’That based on the weighty allegations against him, our team of Counsels in a motion, prevailed on him to disqualify himself for a non-partisan Judge to take over. It should also be established that immediately this motion was moved by our team, Justice Saka practically stopped attending to court proceedings, a development which lends to the fact that he understood the implication of the various allegations against him’’. He said.

Timi Frank to Oyegun: You are major problem of APC not 2019