The House Members accused the Speaker of incompetence, rigidity, haughtiness and lack of leadership quality amongst other issues. 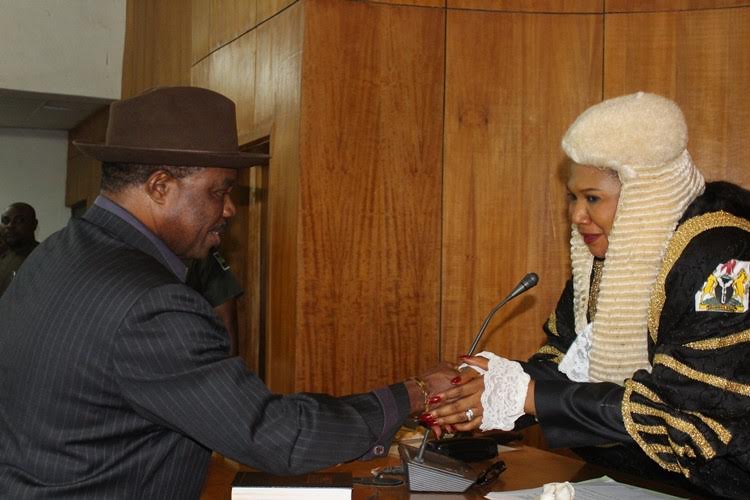 The Speaker with Gov Obiano

Sizable number of the Anambra state Assembly members has concluded plans to move for the immediate removal of the Speaker, Mrs Rita Maduagwu when they resume seating after Yuletide holidays, over a catalogue of issues allegedly ranging from incompetence, rigidity, haughtiness and lack of leadership quality amongst other issues.

They also accused her of insensitivity/inability to pursue and secure their welfare and that of the Assembly as a key independent arm of the state administration.

Mrs Maduagwu, the members alleged, appear unaware that her position did not confer any form of real or imagined superiority, terrestrial powers or competence above others other than being first among equals was accused individually and collectively by legislators who spoke to journalists at Nnewi.

The lapses, according to them gave rise to the brewing cold war currently existing between them and the state Governor, Chief Willie Obiano over the issue of allowances, benefits and other sundry topics.

They recollected when the governor celebrated his first 100 days when they were still battling for their statutory allowances, months after coming into office.

They lamented that they had little or nothing when they left for the Christmas and would not like to raise any further dust in future as it appear the Speaker hasn’t got the carriage to negotiate, argue or defend the house outside.

They therefore reasoned they need a replacement for someone who would not be intimidated anywhere either on behalf of the Assembly or the State.

The situation he said is creating a latent disaffection between the house and the Governor explaining that the “28th day allowance” for instance is meant to help the lawmakers pay their hotel bills pending their proper accommodation by the state government.

“It is not that we don’t have the capacity to cause mischief, but the fact is that we would be misunderstood and painted in bad light” he said, adding however that it would be wrong to interpret their studied silence as a sign of weakness.

The lawmaker said some of their members had approached some influential people in the state to talk to the Governor on their behalf to no avail.

“You see, we kept our cool because if we exert pressure and go public what you will hear tomorrow is that we want to impeach somebody, but that is not the purpose. Our purpose is for us to be treated as lawmakers in other states”, he said.

But in a 9 statement to mark the 100 days of the Assembly, the speaker, Rt. (Hon.) Rita Maduagwu pledged the house’s continued support to the executive arm of the state government to move the state to greatness, while commending Governor Obiano for his purposeful administration which she noted is evident in the development going on in the state.

She said the present lawmakers are experienced and committed and that their legislative inputs in the first 100 days had re-positioned the state legislature and enhanced the living condition of Anambra people.

She said the House had been able to pass bills within its first 100 days, describing it as a sign of fruitful legislative era.