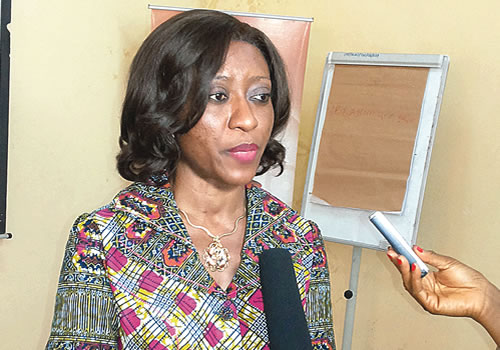 Some Union leaders engaged in a political strategy to make sure that the Director General of Industrial Training Funds [ITF], Mrs. Juliet Chukkas Onaeko [above], is fired from her job, shifted the battle ground from their serialized campaign of blackmail and calumny on the pages of newspapers and online media to the ITF headquarters in Jos, on Monday.

They blocked the entrance to the premises as some placard-carrying staff picketed in protest against the Director General. Other workers who refused to heed calls to join what was an industrial action by the union were harassed and threatened as the placard-waving protesters stormed the ITF headquarters in a what has now become a “Juliet Must Go” campaign.

During the so-called “protest-for-hire” rioting, as union leaders described the action, staff members, who reportedly joined the protests, because they were promised financial and other monetary rewards, engaged other staff who refused to join them, and the situation almost degenerated into fist fights and violent altercations.

It is difficult to understand why the union, ostensibly a part of the ITF management would resort to guerrilla tactics, using the same sad playbook employed by disgruntled and frustrated individuals who resist change and stand in the way of reforms when a new administration initiates actions that strips them of their undue privileges and holds them accountable for their actions.

In a statement of their grievances obtained by Huhuonline.com from one of the union leaders, the union instead made what was no more than a trumped up political document full of baseless accusations, finger pointing and personal attacks against the ITF Director General.

The prepared statement titled: “Industrial Training Fund SSACTAC and AUPCTRE Joint Memo Titled “Sordid State of the Fund and Urgent Need for Resuscitation” alleged corruption and financial misappropriation and accused the DG of acts inimical to cronyism and managerial incompetence. To which end, the errant anti-Juliet band of activists wants the DG out.

Huhuonline.com investigations reveal that the new ITF boss, who was appointed to the position last year by former President Goodluck Jonathan, has embarked on a series of far reaching reforms aimed at among other things to: facilitate and scale up job creation through the training and retraining of at least two million youths annually; match skills development to market/ industry needs; reposition skills development as an enabler for industrialization and economic diversification and improve the country’s industrial competitiveness regionally and globally through skills development.

Little surprise therefore, that she has become the target of a well-orchestrated smear campaign by entrenched vested interests and detractors, who have resorted to paid press propaganda and other terrorist tactics to harass her and impugn her character with venomous and baseless allegations. Some have even descended to the ridiculous level of recommending that she did not pass the IQ test required to hold the position of ITF Director General, her impressive academic credentials notwithstanding.

“I think her problem is that she is from the wrong tribe,” an ITF staff who elected anonymity confided to Huhuonline.com, adding: “now that the APC is in charge, there are people here who think that since the institution is headquartered in their zone, one of their own should be appointed to head it. You must also understand that she is a southerner, and from the wrong tribe; she is not Yoruba or Hausa.”

In their letter of grievance, the union accused the DG of corruption. Specifically, they accused her of absenteeism, profligacy, high-handedness, extra-budgetary spending; violation of due process in contracts and procurement, non-remittance of all deductions from salaries from June to date; non-payment of Training Contributors’ Reimbursement claims; donating her family land to ITF with the intent to collect N450 million from ITF.

They also alleged that the ITF is in dire straits as to warrant the Organized Private Sector (OPS), to call for its scrapping at the recent Nigeria Economic Summit Group (NESG) meeting in Abuja. The Union memo replete with halting grammar and rambling syntax oozes nothing but contempt for the ITF boss and command staff, criticizing policies and actions that would appear to be out of the ordinary and inconsistent with best practices relating to labor-management relations.

The Union memo provoked a detailed rebuttal by ITF management. In a written response obtained by Huhuonline.com, the ITF management expressed disappointment that the Union acted ultra vires by dabbling into issues that are within the remit of management. The statement clarified all the baseless allegations made by the Union even though ITF said it neither agreed with the tone and terminology of the Union memo, nor the sentiment behind it.

“The Director-General and Management of the Industrial Training Fund wish to take exception to the choice of words and the language in the entire document. It is very rude and insulting and this is tantamount to total lack of regard and insubordination to constituted authority. Although we welcome constructive criticism and observations, the mode of expression in the write-up is absolutely out of place and unacceptable. We would therefore advise that the Union should endeavor to be civil in future correspondences,” the ITF statement noted.

The Management also dismissed as false the malicious allegation that the Organized Private Sector (OPS), called for the scrapping of the ITF, saying no such resolution was made at the Nigeria Economic Summit Group (NESG) meeting at Abuja. Insinuations to that effect from comments attributed to some ITF Area Offices who attended the NESG meeting are baseless and entirely without merit and are being investigated by management.

Management also discounted and refuted all allegations of corruption saying peddling such inflammatory allegations is as irresponsible as is the defamation and character assassination that can impact negatively on the image of the institution.

The ITF expressed disappointment that instead of working with management to find solutions to problems and move the institution forward, the Union prefers to engage in empty grandstanding and shadow-boxing, spurring baseless and false information to undermine the authority of the Director General; which seems to be the current pre-occupation of the Unions.

The Fund explained that there are clear avenues for channeling workers’ grievances and lines of dialogue are always open to discuss labor-related issues. That the Union abandoned all existing protocols and ignored due process by embarking on an industrial action with any prior notification to management.

On the issue of non-remittance of salary deductions, the Fund explained that deductions are made at the end of every month when salaries are paid. But the introduction of the Treasury Single Account (TSA) led to some backlog in remittances which are now being processed for payment. At the moment, virtually all outstanding payments have been processed and paid, except deductions for the months of September and October, 2015.

Management was also at a loss to understand where the Union obtained information about “extra-budgetary spending” by the Director General on issues such as extension of the kitchen in the Abuja and proposed purchase of a property in Kano; the absence of internet; the cost of renovating the ITF headquarters, amongst other allegations. (See complete UTF statement attached).

As far as could be determined, the ITF is well on the part of reform and sustainability. Huhuonline.com garnered from ITF staff that the current DG has placed workers’ rights and welfare at the center her vision for an ITF renaissance in line with the agency’s mission and President Muhammadu Buhari’s vision of change.

Huhuonline.com learned that upon taking office, Mrs. Chukkas Onaeko inherited over N200 million staff claims that she paid off within her first two months. To improve on the low morale of staff, she organized a 4-day management retreat to share her vision and four point agenda and to secure employee buy-in to identify the key success factors, challenges and solutions.

Within the same month, she approved and forwarded to the ITF governing council for ratification the promotion of all officers within levels 3-14 who had passed their promotion exams and their salaries have been increased accordingly.

In just four months, she doubled the funds for staff loan from N250 million to N500 million to provide a strong capital base for the staff revolving loans scheme which has made it possible for staff to own their personal houses, vehicles. On staff development, I have also approved over 1,000 requests for various staff developments and skill upgrade in the past one year.

Prior to her appointment, ITF pensioners fought running battles and court cases on issues surrounding payment of their pensions. But all that has changed. Even more impressive, ITF is the only agency to have fully implemented the October 2014 Federal Government Circular, which increased the pension of the old non-contributory pension scheme by 33% and backdated to July 2009. By the second quarter of this year, ITF has paid up all the 63 months arrears to the 703 ITF pensioners beneficiaries; a feat unmatched by any other government agency or ministry.

While raising the visibility of the agency, the new DG has engaged internal and external stakeholders within the skills development eco-system at home and abroad, with a view to positioning the ITF as a robust interface between employers and labor, to address the key challenges inhibiting sustainable skills development and industrialization in Nigeria.