INEC Rejects Sowore’s AAC Suspension, As Court Restrains Him From Parading As Chairman

The Independent National Electoral Commission [INEC] has rejected the purported suspension of the publisher of SaharaReporters news media, Mr. Omoyele Sowore, from his party, the African Action Congress [AAC] where he was the party’s presidential candidate in the last election.

INEC made this clear in a letter addressed to AAC chairman signed by the Secreatry to the Commission, Mrs. Rose Oriaran-Anthony.

In the letter, INEC said that “the Commission shall continue to recognize and relate with Mr. Sowore Omoyele as the substantive national chairman”. 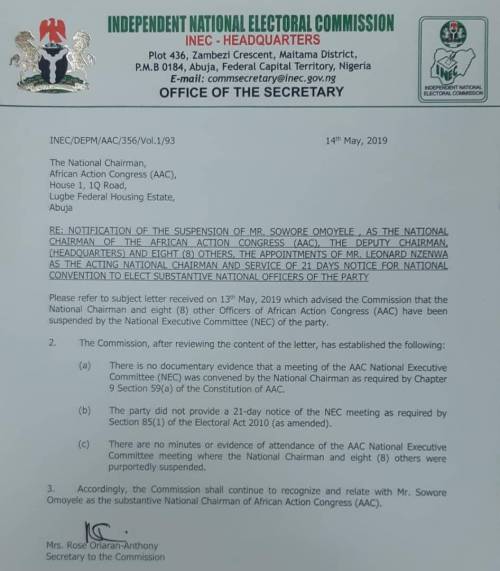 In another twist of events, however, a Federal High Court sitting in Abuja restrained Omoyele from parading himself as the National Chairman of the party.

The court also ordered Malcolm Fabiyi, to stop parading himself as the Deputy National Chairman of the party.

The orders followed an application in a suit instituted by the acting chairman of the party, Leonard Nzenwa.

The court granted the order after the plaintiff, through his lawyer, Barrister Emeka Ozani filed an application to that effect.

In the affidavit in support of the motion on notice, the party alleged that Sowore failed to fulfill the mandatory statutory requirement of holding the National Executive Committee (NEC) meeting of the party quarterly.

He was also accused of receiving money from foreign donor and used it for his personal use in contravention of the provisions of Nigeria’s constitution.