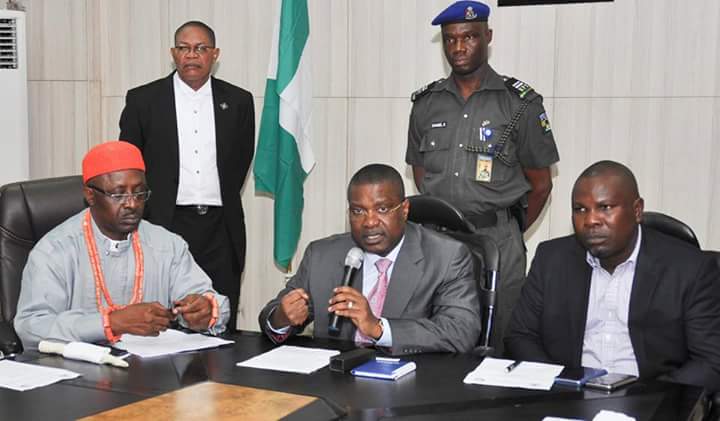 The Managing Director of the Niger Delta Development Commission, NDDC, Mr Nsima Ekere, has called on public officers to play less politics and focus on development initiatives that will improve the lives of citizens.

Mr. Ekere was speaking when the executives and members of Traditional Rulers of Oil Mineral Producing Communities of Nigeria, TROMPCON, paid him a courtesy visit at NDDC headquarters in Port Harcourt.

He appealed the traditional rulers to intervene by advising their subjects who are public office holders and politicians to play less politics and govern more, “so we can bring true development to the people.”

He acknowledged the role played by TROMPCON in ensuring peace and security in the various communities in the Niger Delta, adding that as “the hen that lays the golden egg,” the region could not be ignored.”

The NDDC boss pledged that the Commission would continue with the robust relationship it had shared with TROMPCON over the years. “We will continue to support TROMPCOM. We are already supporting the association in the upcoming conference of the traditional rulers in the Niger Delta,” he declared.

The Chairman of TROMPCON, Eze Akuwueze Ikegwuruka, noted that the royal fathers had underlined the importance of curbing illegal bunkering and other socio-economic vices in the Niger Delta, stating that this prompted the move to organize a conference to address the hydra-headed problems.

He re-stated the position of TROMPCON on the statutory obligations of the Nigerian Liquefied Natural Gas Limited, NLNG, to the NDDC.

He declared: “TROMPCON urges the NLNG as a gas processing company to comply with Section 14(1) of the Niger Delta Development Commission Act which stipulates that 3 per cent of the total annual budget of any oil producing company operating on-shore and off-shore in Niger Delta, including gas processing companies under which the NLNG falls, is expected and requested to discharge its responsibility as constitutionally required without further delay.”

Eze Ikegwuruka observed that the actions or inactions of the National Assembly impacts on the activities of the NDDC. He regretted that the national budget, on which the fortunes of the nation lies, was often delayed.  He added: “We, therefore, appeal to the National Assembly to henceforth expedite action on early passage of the NDDC budget to encourage effective administration of her services to the people of the region.”

The director urged the Federal Government to take necessary steps toward halting desert encroachment in the state.

Dambazau, Taraba Crisis And The Groundless Stance Of Christian Youth Of Nigeria – By Edwin Uhara