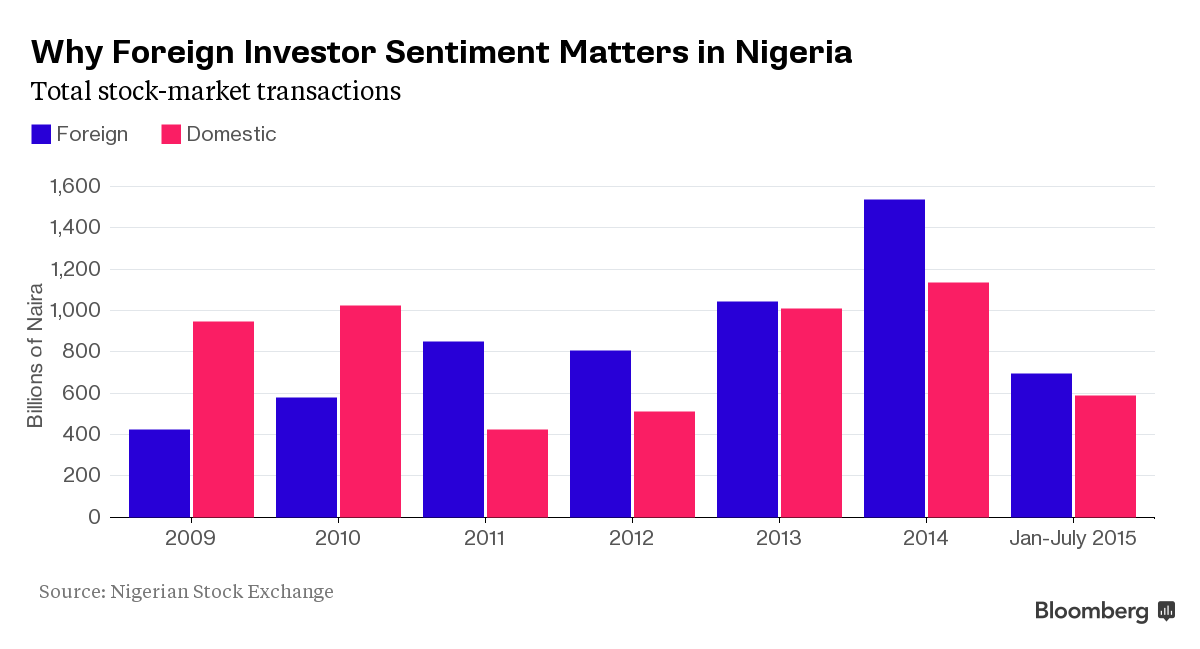 JPMorgan Chase & Co.’s decision to exclude Nigeria from its local-currency emerging-market bond indexes tops a year of pain for a nation reeling from a collapse in oil prices, slowing growth and a lack of economic leadership.

ABOVE: Nigeria has gone almost full circle from a favored investor destination in Africa three years ago — because of its status as the continent’s largest crude producer and most populous nation — to being rebuffed. Photographer: Anadolu Agency/Getty Images

Nigeria has gone almost full circle from a favored investor destination in Africa three years ago — because of its status as the continent’s largest crude producer and most populous nation — to being rebuffed. While most of the weakening sentiment is due to the more than halving in oil prices since last year, a series of missteps by the central bank and President Muhammadu Buhari’s delay in appointing an economic team are adding to the slide.

The JPMorgan news is “a clear signal of dampened investor sentiment,” Manji Cheto, vice president of Teneo Intelligence in London, said by phone on Wednesday. “For things to turn around so quickly in three years’ time shows how important it is for governments to recognize that market sentiment is so fickle, and I don’t think the Nigerian government ever really understood this.”

Nigerian bonds were added to JPMorgan’s Government Bond Index-Emerging Markets Index, or GBI-EM, in 2012 after the central bank under Lamido Sanusi had scrapped foreign investment restrictions and took measures to control inflation and steady the currency.

“There will be a significant capital outflow,” Seun Olanipekun, an analyst at Investment One Financial Services Ltd., said by phone from Lagos, Nigeria’s commercial capital. “The major consequence will be the loss of confidence by offshore investors in our markets. The fact that the Central Bank of Nigeria had time to take action and they failed to do so will negatively impact how the monetary authorities are viewed by the international community.” 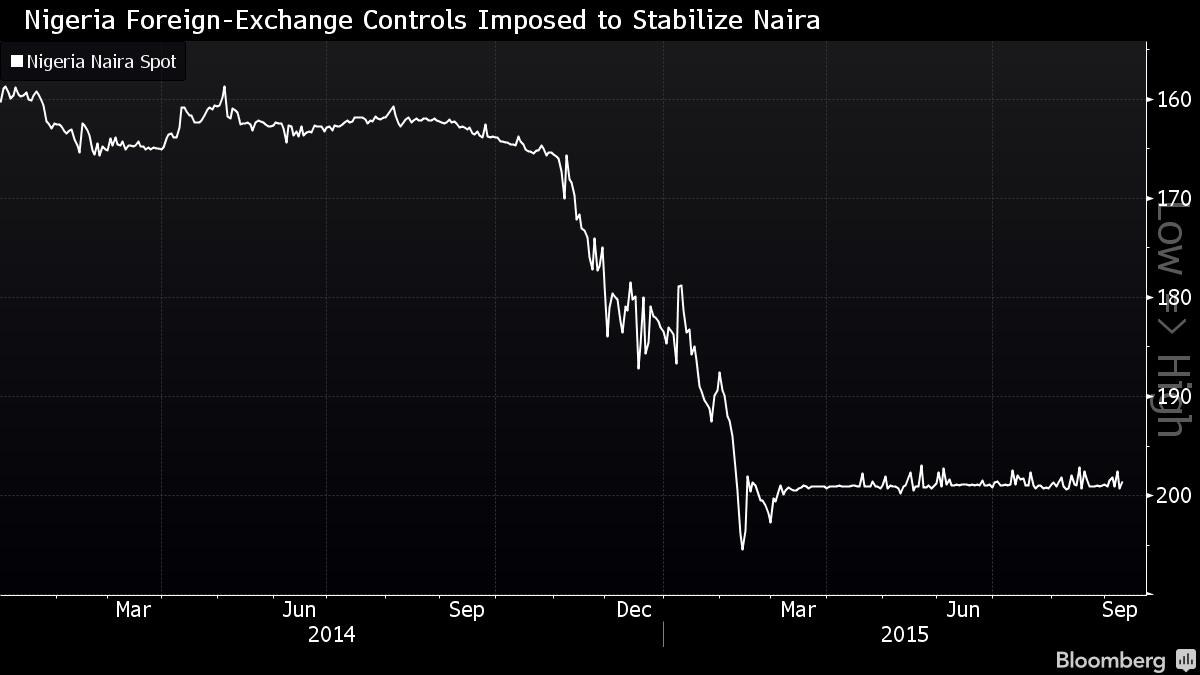 Nigeria’s growth rate averaged 8 percent between 2000 and last year, when it displaced South Africa as Africa’s largest economy following an overhaul of the data that boosted the size of Nigeria’s gross domestic product. In a study released in July last year, New York-based McKinsey & Co. said Nigeria had the potential to expand about 7.1 percent a year through 2030. That would make it one of the world’s top 20 economies, with a consumer base exceeding the current populations of France and Germany, according to McKinsey.

The West African nation’s fortunes have waned along with a slide in the price of crude, which accounts for about 90 percent of exports and two-thirds of government revenue. The economy grew at the slowest pace in at least five years in the second quarter, expanding 2.4 percent from a year ago, compared with 4 percent in the first quarter.

Even if the direct financial implications from the JPMorgan move are not huge, “the symbolic value of this announcement is high,” Alan Cameron, an economist at Exotix Partners LLP in London, said in an e-mailed note to clients. “Nigeria’s inclusion in the GBI-EM index was generally seen as a big step forward in its integration with global financial markets, opening the market to new investment and raising its profile worldwide. That will now be reversed.”

Nigeria’s central bank resorted to restricting trade in the interbank market and using foreign reserves to shore up the currency after it weakened 20 percent to a record low of 206.32 per dollar in the year through Feb. 12. The currency controls have helped to stabilize the naira at an average of 198.98 per dollar since then. It was trading at 198.30 as of 12:46 p.m. in Lagos on Thursday.

Buhari, who took power on May 29, has further eroded confidence in Nigeria’s economic management by delaying the announcement of his new cabinet. That’s making Emefiele’s job tougher because he is forced to make monetary policy decisions in the absence of a clear fiscal policy, said Teneo’s Cheto.

Buhari, 72, has said he will appoint ministers by the end of the month.

“Part of me is secretly hoping that this will send a signal to Abuja to say, we need a cabinet and we need to have a plan that’s clear,” Cheto said.