IPOB: Why Buhari must stay away from Biafra land 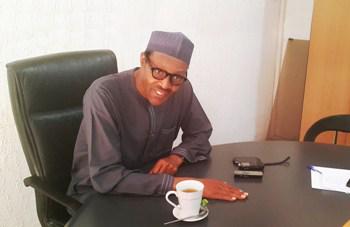 In this latest statement signed by spokespersons, Barrister Emma Nmezu and Dr. Clifford Chukwuemeka Iroanya, the Indigenous people of Biafra [IPOB] expatiates on the necessity of President Muhammadu Buhari staying away from the South east.

The group cited, among other things, numerous killings, both by state and non-state actors which never elicited any sort of condemnation by President Buhari.

WHY WE DO NOT WANT MUHAMMADU BUHARI IN BIAFRALAND FOR NOW

Retired Major General Muhammadu Buhari who committed treason on December 31, 1983, has concluded plans to visit Enugu in Biafraland on the 22nd of December, 2016.

The Indigenous People of Biafra (IPOB) have unanimously agreed that Buhari is not welcome in any part of Biafraland and reasons abound for this decision.

We recall that on the 2nd of June, 2016, Mrs Bridget Agbahime, a 74-year old Biafran trader was beheaded at Kofar Wambai Market in Kano by five Islamic fundamentalist.

There was no condemnation from Buhari or from any of his acolytes.

To make matters worse, the killers were freed unconditionally from detention on November 3, 2016 by a Magistrate court in Kano presided over by Jibrin Muhammed.

Under the watch of Buhari, the case has been closed and the killers are free to go ahead and carry out more killings for Allah and for Prophet Muhammed.

The Vanguard Newspaper report of  April 26, 2016 gave a conservative figure of 40 Biafrans that were slaughtered and thousands of others with severe matchet cuts all over their bodies and some with their vital organs severed off their bodies.

Muhammadu Buhari even refused to take a distress call from the Governor of Enugu state. Till date, Buhari and his acolytes have not condemned the killings.

We have to remind the public that Muhammadu Buhari is the official Grand Patron of Miyetti Allah Cattle Breeders’ Association Of Nigeria (MACBAN).

According to the Vanguard Newspaper report of April 4, 2016, the Police Public Relations Officer, DSP Ahmad Muhammad confirmed that Hausa-Fulani terrorists invaded the community of Ohali-Elu town in Ogba/Egbema/Ndoni LGA of Rivers state, Biafraland and killed 12 people including a priest.

Prior to that incidence, on the 5th of January, 2016, the Buhari-supported Hausa-Fulani terrorists abducted the King of Ubulu-Uku Kingdom, His Royal Majesty, Akaeze Edward Ofulue III and killed him in the forest.

Typically, no words of condemnation from Buhari and his acolytes and nobody was arrested and prosecuted.

Muhammadu Buhari has continued to militarize the entire Biafraland under the guise of “Operation this and Operation that“.

Biafraland is not a war zone, yet it has the highest amount of military personnel and the greatest solder-to-civilian ratio in the entire African continent.

These military personnel in Biafraland have continually carried out enforced disappearances, rape, extortions, and arson on the lives and properties of innocent and unarmed Biafran people.

Meanwhile Section-217(2) of Nigerian Constitution was explicit on the functions, duties, and responsibilities of the Armed Forces of Nigeria.

The world is already awash with the report from Amnesty International on the killings in Biafraland, which is a microcosm of the actual extent of extra-judicial killings and massacre of defenceless and peaceful Biafrans ordered by Muhammadu Buhari and executed by Col. Issah Abdullahi and Co.

Although the report from Amnesty International is commendable, we assert that over one thousand Biafrans were killed on the 30th of May, 2016 alone.

Many of the killings were done when the victims were inside the Church either praying or resting.

The case of Biafrans who are being kidnapped by secret agents, tortured, and kept in perpetual detention under inhuman and degrading conditions is public knowledge.

Among the illegally detained Biafrans is the leader of IPOB, Mazi Nnamdi Kanu who has been held since the 14th of October, 2015.

Even after several court orders on the unconditional release of Nnamdi Kanu, Buhari has refused to obey the court orders but rather went further to hire the services of Justice Binta Nyako who is the wife of a terrorist, to adjudicate on the phantom court case against Nnamdi Kanu.

From the foregoing, it is crystal clear that Buhari is not welcome in Biafraland because his coming is tantamount to biting off our nose to spite our face.

Therefore, we warn Muhammadu Buhari to stay away from Biafraland to avoid unpleasant consequences on him and those inviting him.

To be forewarned is to be forearmed. ENDS.

APC, Change and the hope of Bauchi State citizens