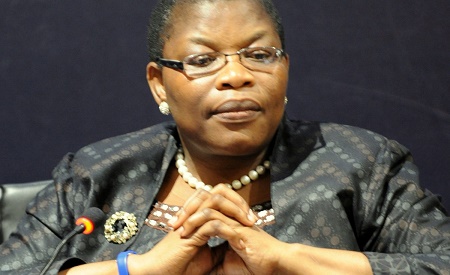 But for his antecedence as a consummate media handler, one would have been disappointed that Presidential Spokesperson, Alhaji Shehu Garba decided to join issues with the Convener of Bring Back Our Girls (BBOG) and former Minister of Education, Mrs. Oby Ezekwesili for saying his boss, President Muhammadu Buhari does not deserve to be in office.

Garba Shehu should have seen through Ezekwesili and arrive at the conclusion that he could have better spent the time used on writing the statement dismissing Ezekwesili for other uses.

Without doing any library research anyone can see that this former World Bank Vice President is eager to line her egg nest.

She left that supposedly cushy job to take up appointment under the Obasanjo government, returned to the country under Dr Goodluck Jonathan but there was no deal until the unfortunate abduction of the Chibok Girls provided the material to blackmail that government with the formation of BBOG.

It took the surfacing of how she misappropriated a total of N458 billion allocated to the country’s educational sector when she served as minister between 2006 and 2007 to silence her.

Still along that line of hustling to get on the joy ride she became hyper critical of the Jonathan government while making it look like she was on errand for the opposition.

Once the new government emerged without her being named on the cabinet she found a new cause that saw the BBOG promptly revived and used to harass the government of President Buhari.

The truth has a way of eventually coming out.

Other arrowheads of BBOG have either returned to their full time occupations or find newer ways of making contributions to the nation’s development while still working to ensure the girls are one day released.

Not even the dawning realisation to Nigerians that the group could be more complicit in the captivity of the girls can make her behave herself.

The former minister has therefore dusted up what is left of her credibility and deployed it to champion the cause of ‘2000 Nigeria Immigration Service recruits’ whom she is making to look like hapless victims.

Two quick things: aren’t these the same recruitments that she claimed were made without adherence to due process; is this the same former minister who had no qualms about downsizing for efficiency in line with World Bank dictated global best practices?

One needs ask these questions because there should be limits to grandstanding even when political manoeuvres are called for.

My expectation is that Ezekwesili would have by now deployed her clout and access to the Boko Haram intellectual components in pressuring Ahmed Salkida, Ahmed Bolori and Aisha Wakil to facilitate the release of the Chibok Girls.

That she could immediately be latching onto another cause, albeit for selfish and adulation purposes, signposts how the BBOG outings had always been influence courting exercises for a woman who is unaccustomed to being out the influence circle.

She has spoken in a couple interview about how she left nothing behind in government that she wants to return to but this latest development has definitely put the lie to her claims.

Not just at this recent sit out, her recent comments on national issues betray a refusal to accept the realities of the time.

Ezekwesili mentioned that the impunity that characterised the Jonathan administration has resurfaced under the present government, which leaves one wondering how much responsibility she is willing to accept or if she even has the capacity to recognise that she must accept responsibility because the foundation for impunity was laid and solidified under the government she served and being a minister at that time there is no record that she productively tried to halt that foundation from being laid.

Even with such reckless past, the least she can do is to acknowledge progress being made by President Buhari to undo the damage she and her colleagues did in setting off that culture.

If she called it impunity now what would she have called it before the incumbent government scaled back on the abomination that Ezekwesili’s People Democratic Party (PDP) government left behind in 16 years.

Ezekwesili spoke of hardship without acknowledging her role in how the policies she actively supported as a minister started off what Nigerians are today experiencing.

If she were truly sincere about the plight of the lower income bracket population she should deploy the same tricks her and her buddies at the World Bank use to market unneeded loans to emerging economies to reverse the damage she has done.

This is why I think Garba Shehu shouldn’t waste valuable time in responding to this woman.

She is in need of rehabilitation as the economy of the world has taken a hit so even a World Bank big wig is not as insulated as one would assume.

Instead of countering or trying to correct the misinformation that Ezekwesili is putting out, the presidential spokesperson should recognise it as the desperate cries of a frustrated and sinking woman in need of intervention.

So when next Ezekwesili goes on her rant, if Garba Shehu has to write anything it shouldn’t be a response but a compassionate memo to Mr President to find one small appointment for madam, whose co-convener at BBOG, Hadiza Baka Usman already has a national assignment.

It is not easy being left out “inside this cold of Abuja”.

Agila contributed this piece from Abuja.

Leicester City to clash with Chelsea in EFL Cup 3rd round