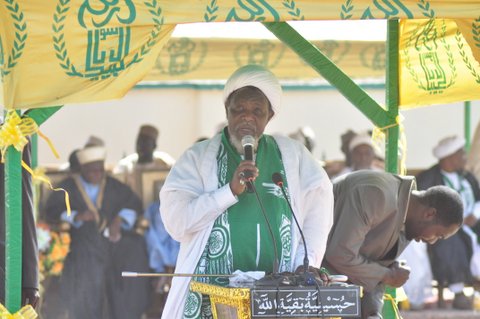 The Islamic Movement in Nigeria (IMN) has lamented what it termed the increasing ‘serial violation of their rights continuing with state-sponsored hate, violence and repression’.

Head of Martyr Foundation of IMN, Sheikh Abdulhamid Bello narrated this in a statement issued on Monday.

The group recounted how its members attending the mourning sessions held at the Islamic Centre in Kaduna were the first to suffer molestation in the hands of security forces as they were intercepted on their way, arrested and charged to court.

The group thereby calls on the general public to be mindful of the shameless disregard to civilian lives and properties exhibited by Buhari administration, and to unequivocally condemn it in its entirety.

It reiterated its demand for the unconditional release of their leader, Sheikh Ibraheem Zakzaky, his wife and all those being detained illegally since the Army massacre in Zaria last year.

The full statement reads as follows:

Good day Ladies and Gentlemen of the press.

Since the gruesome premeditated attack on the Islamic Movement in Nigeria (IMN) by the Army in December last year, we have never had it so bad, where our right to life as citizens of Nigeria is trampled upon like during this year’s Ashura season.

We had a premonition of what was to come, when a devilish scheme to brutalize us was exposed earlier.

The purported ban of our activities by governor El-Rufai was meant to be a trigger for the planned attacks. It indeed instigated the murder and destruction of properties of our members.

Some blood thirsty Izala/Salafi preachers saw the opportunity to pour their venomous hate messages against the Movement and now even back it up with state-sanctioned attacks.

Soon after, our members attending the mourning sessions held at the Islamic Centre in Kaduna were the first to suffer molestation in the hands of security forces as they were intercepted on their way, arrested and charged to court.

But it was much worse at the time the attacks became full blown.

By the tenth of Muharram 1438, members trooped out en masse to mourn the martyrdom of Imam Husain (AS) as it is the practice within the Islamic world.

First signs of the scope of the attack on us came from Funtua, Katsina state, when heavily armed policemen, in broad daylight, opened fire on the peaceful march.

That resulted in the premeditated killing of ten members on the spot. Several others sustained varying degrees of injuries, including women and children.

To aggravate the situation, the police arrested 36, including underage people. Soon thereafter, the pattern of attack was almost simultaneously replicated in Kaduna, Sokoto, Kano and Jos.

In Kaduna, the Ashura procession was concluded peacefully.

However, a contingent of security agents disguised as hoodlums ambushed members on their way home.

This was followed by an organized attack on the Islamic Centre in the Tudun Wada neighborhood, leading to the murder of 3 people, in the most gruesome manner.

The video clip of that brutal murder went viral on the social media.

Looting and wanton destruction of properties belonging to our members ensued and finally the centre was completely razed by sponsored thugs, under the watchful eyes of the security forces.

Jos, the Plateau state capital became a theatre of war against the Movement as well. Armed soldiers arbitrarily arrested women and children clad in black attire, a symbol of the Ashura mourning on their way for Ashura mourning procession.

This was followed by the unleashing of terror by combined team of soldiers, policemen and street urchins on our members, burning the Jos Islamic Centre and looting valuable properties.

Although no life was lost in the melee, the police and the soldiers at the scene displayed brazen disregard for life and property.

A total of 46 members, including nursing mothers, pregnant woman and many underage children were arrested.

Bail was denied by the police until recently after spending close to forty days behind bars.

The precedence that the Movement has never been involved in the myriads of crises in the state notwithstanding, Governor Lalong, who was nowhere near banning the various armed tribal groups that have denied Plateau its peace for over a decade, suddenly surfaced in the media and imitated his Kaduna state counterpart, with an arbitrary and unjustified ban order on the Movement.

In Kano, the Ashura procession had ended peacefully before security agents masquerading as youth vanguard attacked people as they went their various ways.

Three people were instantly murdered and many others sustained injuries. Over fifty members of the Islamic Movement, mostly women and children, were paradoxically arrested, arraigned before magistrate courts and remanded in prison custody.

In all the attacks of Ashura, certain pattern emerged that showed the centrality of planning and execution.