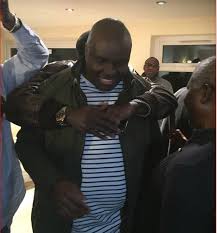 Ibori, who was recently released from London Prison arrived Benin airport unannounced in a chartered plane.

The ex-governor, who was convicted by a British court on charges of money laundering, arrived at the airport aboard IZYAIR, with registration number India Zulu Yanky (5NIZY).

The flight, a Challenger 60, landed at the airport at about 2.25pm.

PHOTO: James as he arrives at his residence in Oghara today.

On arrival in Abuja earlier, he was reportedly picked up by operatives of the Department of State Services (DSS) and then taken to the head office of the DSS for what was described as a briefing.

He left Benin for  Oghara, his hometown where he is being awaited in by his relations and supporters.

it should be noted that Mr. James Ibori has been serving jail sentence in London prison for some time nown.