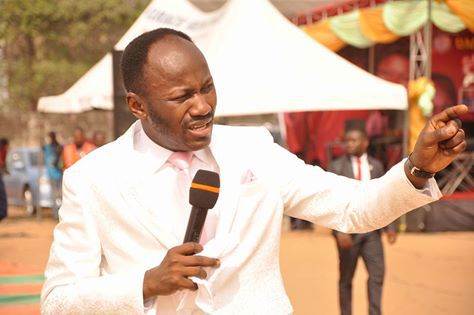 Radical cleric and General Overseer of Omega Fire Ministry Worldwide, Apostle Johnson Suleman, has broken his silence on the ongoing killings in Southern Kaduna and concluded that Nigeria was sliding into fascism and official terrorism.

He warned President Muhammadu Buhari and his co-travellers to stop acts of divisiveness, marginalisation, exclusion and palpable hatred for Christians and the body of Christ.

“The lack of tolerance currently being witnessed was unprecedented in the history of the country. Anybody who makes the church and Christians his target for destruction in 2017 will die!

“God will use them as scapegoats”, he said.

According to him, the double standards being adopted by Buhari and the government of All Progressives Congress [APC] in handling state affairs, especially his silence on the genocide in Southern Kaduna, has continued to fuel mutual recriminations and mistrust among the diverse ethnic and religious groups in the country.

Suleman condemned what he referred to as crass abuse of power by the APC in the ongoing genocide in Southern Kaduna.

A statement by his Advisor (Public Communications), Mr. Phrank Shaibu, obtained in Abuja, said Suleman made threw the bombshell during the last edition of the monthly Miracle and Fire Night Service of the church for 2016 in its international Headquarters in Auchi, Edo State.

He said a close look at unfolding events reveals that some members of the cabal in the Presidency “who are notorious for their hatred for Christians are pushing  the country to the precipice and are determined  to start a war between Christians and Muslims – a war that will irreversibly mark the end of Nigeria.”

The cleric said he was convinced beyond reasonable doubt that time was “running out on Nigeria because of the way President Buhari was piloting the affairs of the nation.”

He said, “The current destruction of churches and about 49,000 houses as well as the mindless onslaught against Christians in Southern Kaduna by Islamic fundamentalists disguising as Fulani herdsmen in a well-choreographed acts under the watch of Governor Nasir El-Rufai and President Muhammadu Buhari, is completely unacceptable.

Suleman warned that if Nigeria must continue to exist as an indivisible entity, then the President must come out to assure Nigerians that his administration will desist from being used as a platform‎ for such primitive persecution and mindless killings.

“Apart from the appointment of Service Chiefs and heads of Para-military organisations that is skewed in favour of the North and Muslims, even personal security and safety of key Christian figures who hold dissenting views are in danger”, he said.

Olubadan wrathful over removal of Iyaloja of Ibadanland