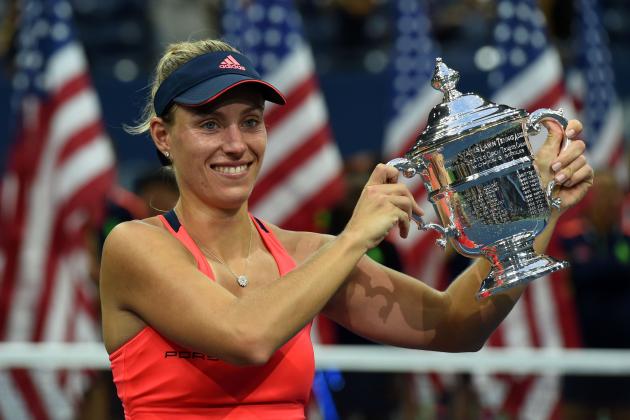 Newly crowned No. 1 Angelique Kerber overcame the heat and 10th-seeded power-server Karolina Pliskova, 6-3, 4-6, 6-4, to become the first German to win the US Open since Graf in 1996.

Kerber rounded off her third Grand Slam final of 2016, on an oppressively hot Saturday afternoon in Arthur Ashe Stadium

It marks the second major title of the year for the 28-year-old, who won the Australian Open in January.

There was a stretch during the post tennis-boom years of the mid-1980s into the late-90s when German tennis, in both the men’s and women’s game, was downright dominant.

On any given Sunday, you could all but guarantee that Steffi Graf or Boris Becker or Michael Stich would be holding a trophy aloft somewhere along the circuit.

But the big-stage titles have come few and far between since.

It left frustrated Germans wondering if they would ever again produce a multi-Grand Slam champion.

The wait is over.

Coming into the final, Kerber knew that in order to separate herself she would have to get to Pliskova’s weapon of choice.

(The Czech came into the tournament with a WTA-best 407 aces).

And that’s exactly what she did.

She converted the second of two break points in the very first game of the match, then consolidated for a 2-0 advantage.

With her opponent serving to stay in the first set down 3-5, 30-40, Kerber swatted a forehand approach down the line for a winner.

Kerber saved the first four break points she faced on Day 13, but couldn’t fight off the fifth, at 3-all in the second.

Serving at 30-40, she didn’t have the legs to track down a nifty scoop lob from Pliskova.

Pliskova had roared to the delight of the sold-out crowd of 23,771 when the ball touched down on the baseline.

She had accomplished something that no other player had been able to do thus far at the US Open: take a set off Kerber.

Pliskova, into her first Grand Slam final, played the riskier brand of tennis, one that resulted in 40 winners and 47 unforced errors.

It began to pay off in the third set, as she dictated play from the baseline.

A forehand error from Kerber provided her with her second break of the match in the third game.

However, Kerber would level the match at 3-all, then break her 24-year-old foe at love at 5-4.

A wide forehand gave the left-hander her second Slam of the year in two hours and seven minutes.

“It’s just amazing. I won my second Grand Slam in one year. It’s the best year in my career,” said Kerber.

She pocketed $3.5 million in prize money for her victory.

“When I was a kid I was always dreaming to one day be the No. 1 player in the world, to win Grand Slams.

“And today is the day. All the dreams came true this year.”

“I found that I can play my tennis on the biggest stage against the best players,” said Pliskova.

Pliskova is the first Czech woman to reach the final here since Helena Sukova in 1993.

“I knew that it was going to be difficult to play her. I was just happy to make it to a third set.

“Even though I didn’t win, I’m proud of myself.  Hopefully, there will be many more finals to come.”

Pliskova was limited to five aces in the match, while Kerber totaled 21 winners to 17 unforced errors.

Kerber will officially rise to No. 1 when the updated ranking are released on Monday.

She becomes only the second German woman to achieve the historic milestone since the computer rankings were introduced in 1975.

She is also the first since Graf spent the last of her record 377 weeks atop the charts in March 1997.

Her rise to the top spot brings an end to the reign of Serena Williams, whose sixth stint at No. 1 began more than three years ago, in February 2013.