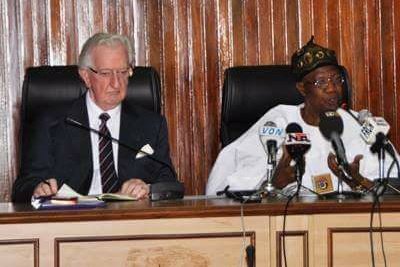 The Minister of Information and Culture, Alhaji Lai Mohammed, has pledged to leave a legacy of turning Nigeria’s rich tourism potentials to a tourism economy.

The Minister made the pledge in Abuja on Tuesday when he received the International Tourism Adviser of the United Nations World Tourism Organisation, Mr. Jim Flannery, who is in Nigeria to assist in the review of the country’s Tourism Master Plan.

“Like I said, I want to leave a legacy as the Minister that came and transformed the Creative Industry to a Creative Economy.

“This is why we are here today and I believe that we have all it takes to make it work.

”I am tired of Nigerians saying we have tourism potentials.

“I want us to start realizing those tourism potentials. I am tired of saying that tourism can create thousands of jobs in Nigeria.

“I want us to start creating those jobs,” he said.

Alhaji Mohammed said the present administration has the political will to drive the process, particularly by removing all the bottlenecks hindering the active participation of the private sector in the tourism industry and relaxing the rigid visa regime that discourages tourists from coming into the country.

“Our role really as government is more of regulatory and providing guidelines and protection, but the real jobs are within three groups of people: The states, the local community and the private sector,” he said.

The Minister expressed the delight that the visit of the UNWTO International Tourism Adviser has kick-started the process of actualizing the six-point agreement reached between Nigeria and the world tourism body during his visit to its headquarters in Madrid, Spain, in July.

“Today is the first concrete evidence that truly all that I said we were able to achieve at our July meeting with UNWTO is true and that’s why I am particularly glad that Mr. Flannery is here today.

“His presence here is the first step in actualizing one of the six promises and commitments that were made to us by the UNWTO,” he said.

Alhaji Mohammed acknowledged the contribution of Mr. Flannery to the drafting of the Tourism Master Plan ten years ago.

He said he is in Nigeria to assist the Technical Committee set up by the Minister to review the document and identify those areas that can be implemented within the shortest time possible.

The Minister is optimistic that tourism remains the low hanging fruit that will rejuvenate Nigeria’s economy and empower the country’s poor.

“Tourism is so unique. It’s the only industry in the world that is pro the poor people.

“The Zuma Rock, the Owu Waterfall were put there by God. The Cross River Wild Park was not man-made.

“So it is one industry that if we harness properly, we can bring development right to the rural areas, create jobs and harmony,” he said.

Alhaji Mohammed stressed the importance of having more World Heritage Sites in the country in order to attract tourists, saying the only two sites currently in the country are not enough.

In his remarks, the UNWTO International Tourism Adviser, Mr. Flannery, said there is currently a renewed interest in tourism even among the big economies like the United States of America.

That is because it’s assuming prominence in the global economy due to its vitality and inexhaustible nature.

“Tourism worldwide is becoming recognized more and more as one of the great economic activities that is of major benefit to countries.

“Why is it of benefit?

“Because tourism unlike manufacturing industry can go into the regions and in fact it does go into communities and you don’t need major structured investment for tourism to be successful,” he said.

Mr. Flannery observed that the Tourism Master Plan could not be implemented ten years ago because of the sheer volume of activities that previous governments wanted to undertake at once, but lauded the new approach where salient areas can be identified for immediate implementation.

Obiano’s speech during the presentation 2017 Budget